A new Sat Nav which I have recently bought for my Mini has changed my life. Hours of getting miserably lost down country roads is a thing of the past and accompanied by the pleasant sounding voice of Connie (for that is the name I have given her), with my travelling friends Jill and Cherry, I found Brockhampton Cottage near Ross-on-Wye in Herefordshire with the greatest of ease.

The wind was blowing quite hard as we followed the mown path up the hill through the perry orchard to reach the garden. No distinct boundary identifies the garden as such, the flower border emerges softly into the meadow.

The owner Peter Clay, inherited the property in 1999 and it was his frustration of not being able to easily obtain the plants that he wanted that he with his friend Mark Fane started up the online business Crocus.co.uk. This led onto a friendship with Tom Stuart-Smith and together they created this hill top garden.

To the west side of the house is the lawned terrace, with a line of solid cylinder shaped beeches. We take the steps up

and a clematis tumbles down. 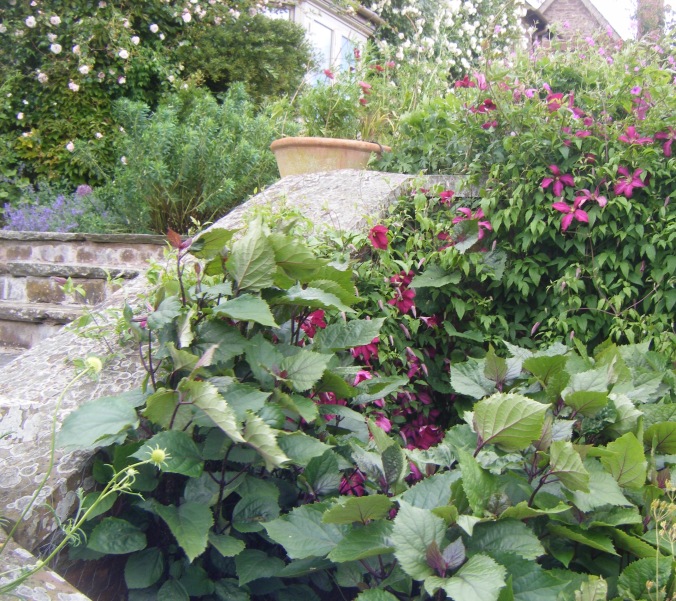 The paved terrace is edged with a deep red astrantia major, 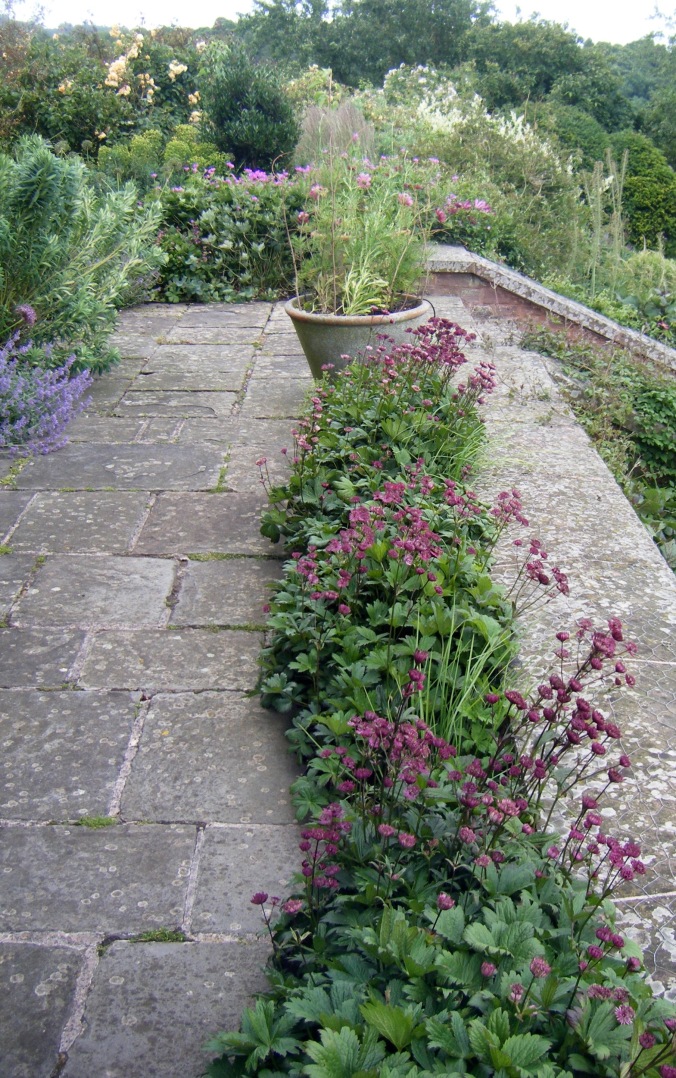 and leads round to an outdoor dining space clad in a vine, it feels more like France than England.

Acanthus and a terracotta pot are placed at the root of the vine,

and sweet peas climb up from a small quirky metal cauldron.

On the south face of the house an iceberg rose is abundantly blooming against the wall. 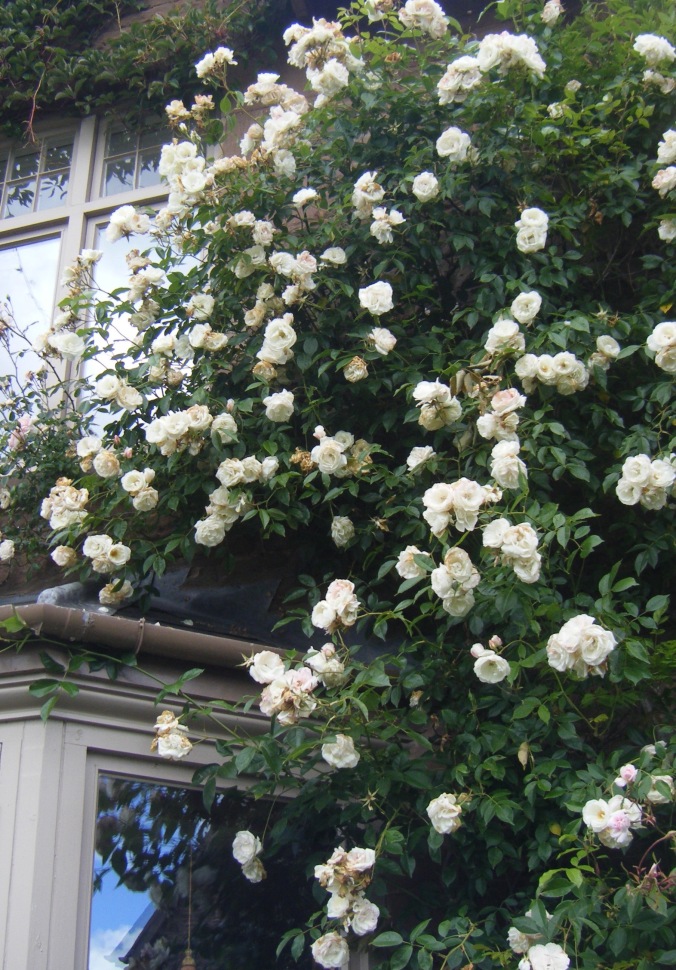 guiding you towards the hilly and verdant Herefordshire landscape. 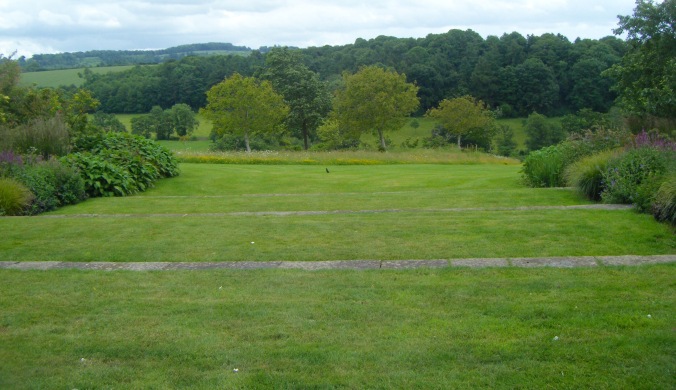 On either side the borders are planted generously, 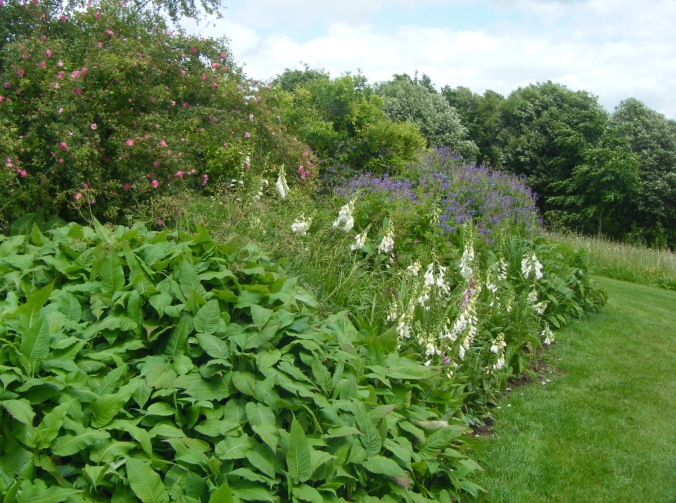 we could follow the path down the hill but continue the line of the left hand border.

and I am thrilled to see the trusty Spike again. We previously met in the snowdrops back in February at Welford Park (blog 8).

We come to the east side of the house where the drive rolls in. The planting is exuberant, 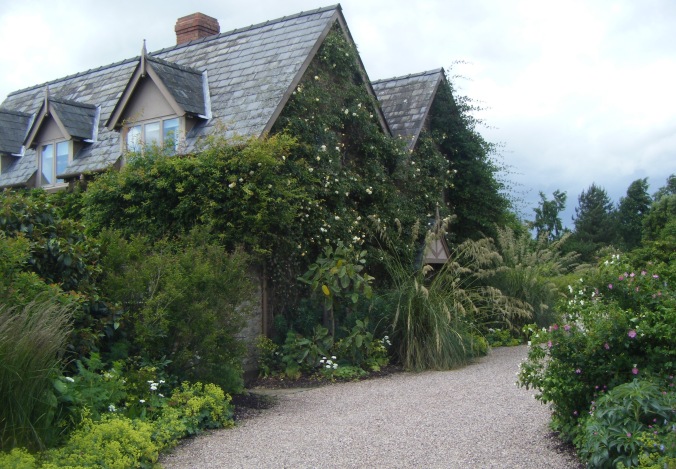 and we admire the elegant plumes of ampelosdesmos mauratinicus which grace the front door of the cottage.

Large shrubs of Euphorbia x pastuerii grow between the cottages,

and a short length of productive cordon fruit trees provide height and a screen.

Down the steps from the drive,

a glazed jar stands at the foot.  In this sunken area the box is waiting for its clip and annual Orlaya grandifolia is planted around the colourful roses. 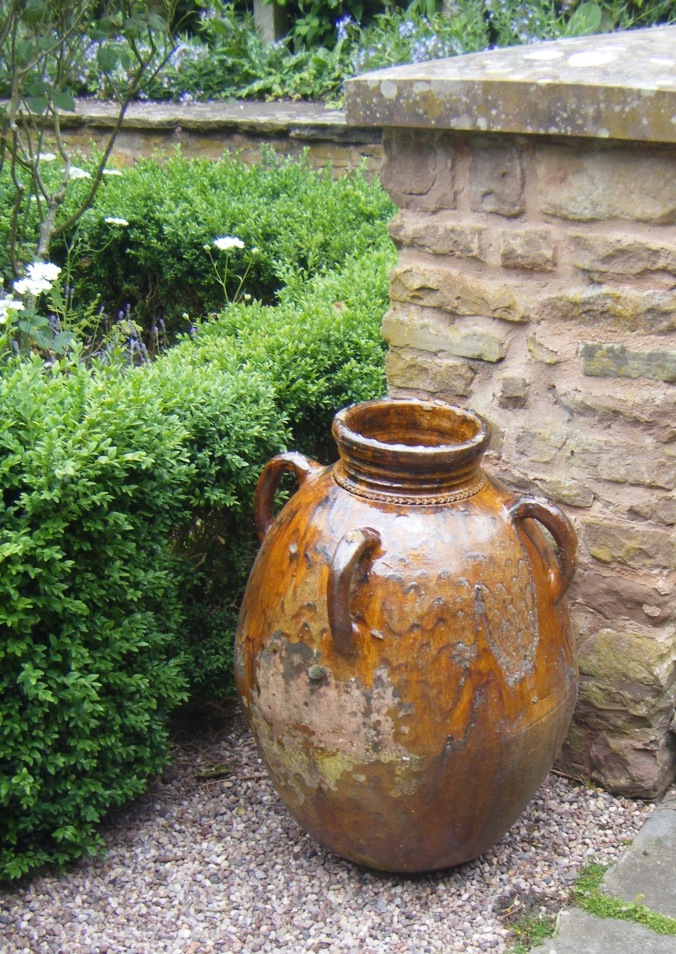 The path leads straight up to the front door where giant lilies reach gutter height. I am envious of the absence of any pesky beetles. The soft earthy pink of the walls 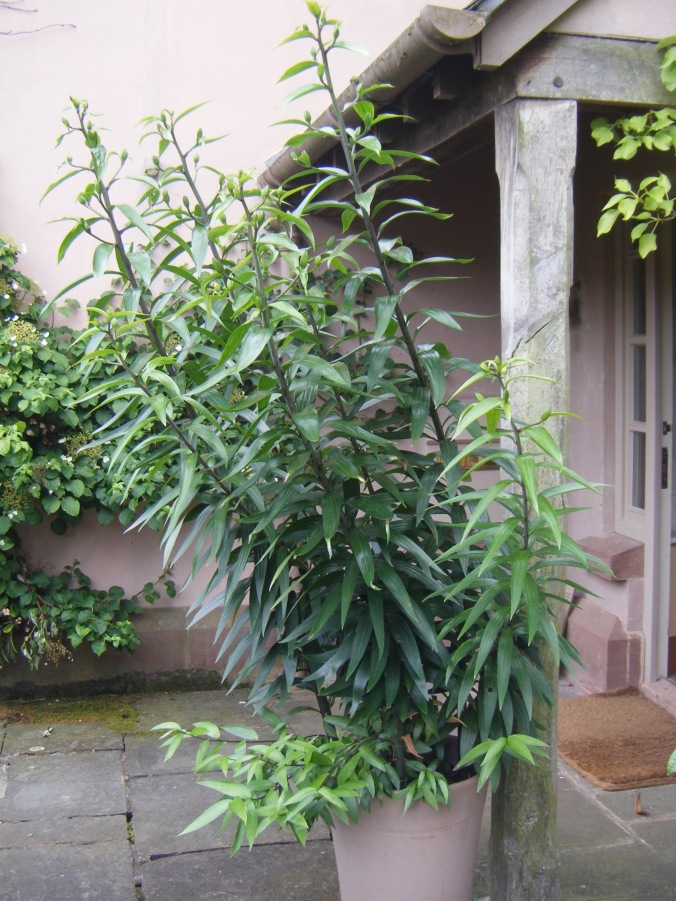 is repeated on the greenhouse, also set in a sunken area a little way from the house.

The water tank is painted too, and its shape reminds me of an upright piano.

There is a gentle transition of the organised space into a wilder area where in this patch close to the drive oxeye daisy is the predominant wildflower.

Further below are the wildflower meadows that are so carefully managed. Peter explains how diggers originally removed the topsoil to provide a less fertile medium for grass to compete. Yellow Rattle is sown fresh in September also helps to control the grass. It is important to maintain the right mix of plant species which will be cut in August when the seed has ripened but the mowings are removed to prevent adding nitrogen to the site. It is probably as much work as an herbaceous border but the result is magnificent: 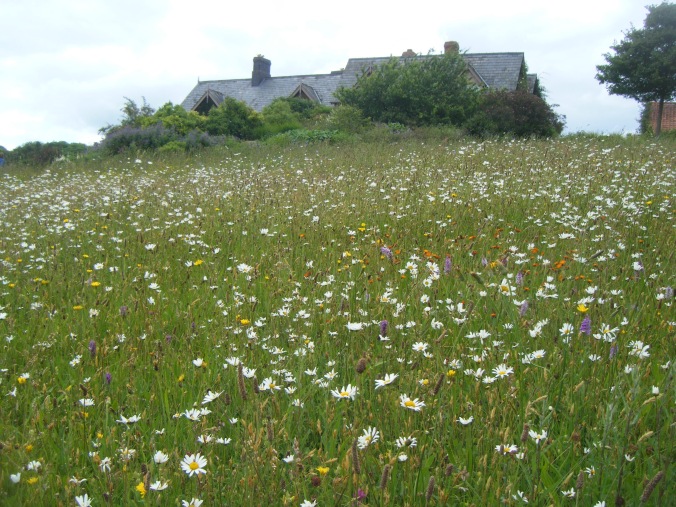 And dotted about are the purple orchids.

Following the path down to the lake we pass the collection of pale blue bee hives. 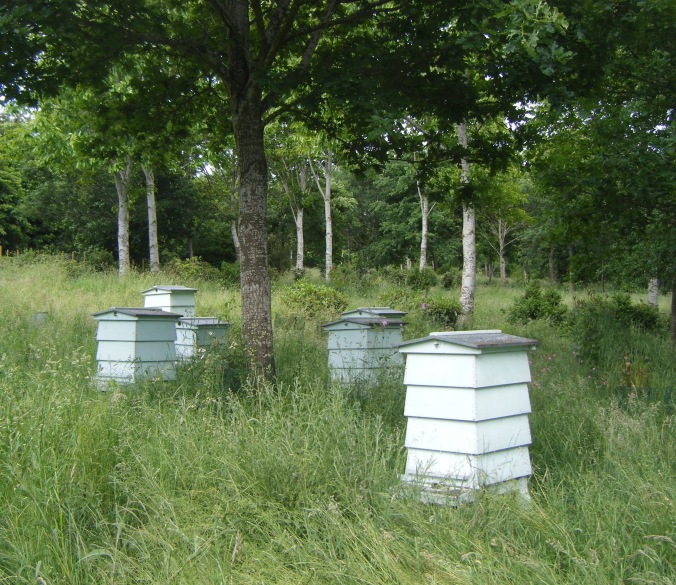 You would never have known that the stream was made just last year. Water is piped up from the lake below. It just all looks part of the scenery with the water burbling gently over the rocks.

The planting looks mature, with primulas and ferns along the water’s edge.

Down on the lake the swans appear stationary.

A collection of trees and swathes of gunnera and irises.

The path winds around the lake and we discover it is because of the cygnets that the proud parents remain in the centre.

Looking back up to the house it is hard to imagine that it was once surrounded by high Thuja hedges planted to filter the wind but which totally blocked the views beyond.

The garden has been open since 2010. It is an insight in how to design a garden perched on a hill, how to incorporate the surrounding landscape with the garden and a lesson on how to grow a wild flower meadow.

Brockhampton Cottage is a combined opening with Grendon Court just a ten minute drive away which we visited next.