Not far from Leominster in the country lanes of Herefordshire the garden gate swung open at Upper Tan House. It is a compact garden of one and half acres in a beautiful setting and containing a little bit of just about everything. 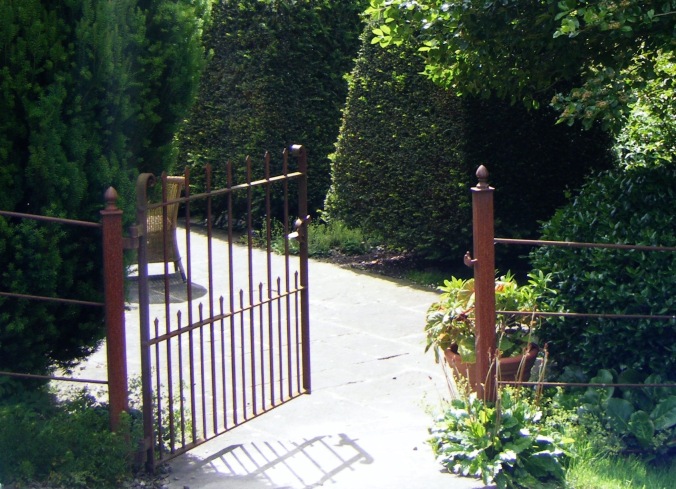 James and Caroline moved here from London some 21 years ago. Unable to terrace, the house is perched up above the garden.  Divided by paths through herbaceous planting, we take the central path gently down the slope to the lawn.

Through the spikes of deep blue delphiniums rising above phlomis russeliana is hornbeam trimmed into a shape reminiscent of a cake, surely Mary Berry’s finest.

Behind the ‘cake’ and at the end of the lawn is a border where damp-loving plants such as hosta, iris and primula candelabra are growing vigorously.

Looking back up towards the house, blocks of yew stand solidly and architecturally above a patchwork of soft colours.

Not an inch of spare ground is showing through. 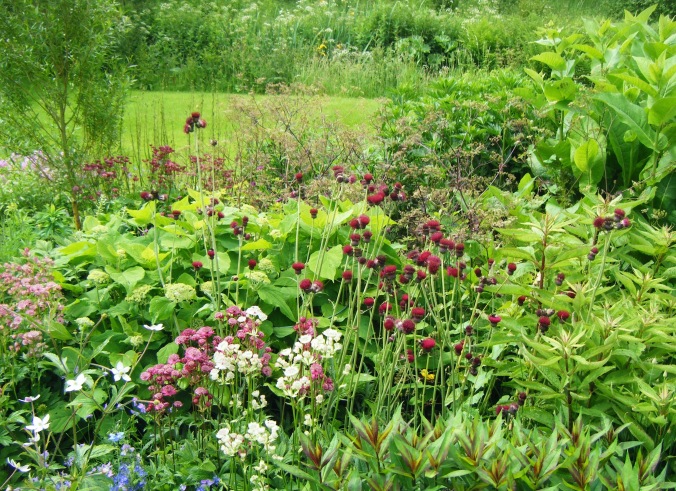 The busy haze of alliums heads will be succeeded by Japanese anemones.

The fresh dainty white anenome rivularis edging the lawn is becoming a bit of a favourite of mine.

Down by the stream and hidden away in the bushes yet still accessible, is a little boat bench, the perfect place to pause awhile,

by the small River Stansbatch on its way through the garden. Although native crayfish are in decline they can still be found here. 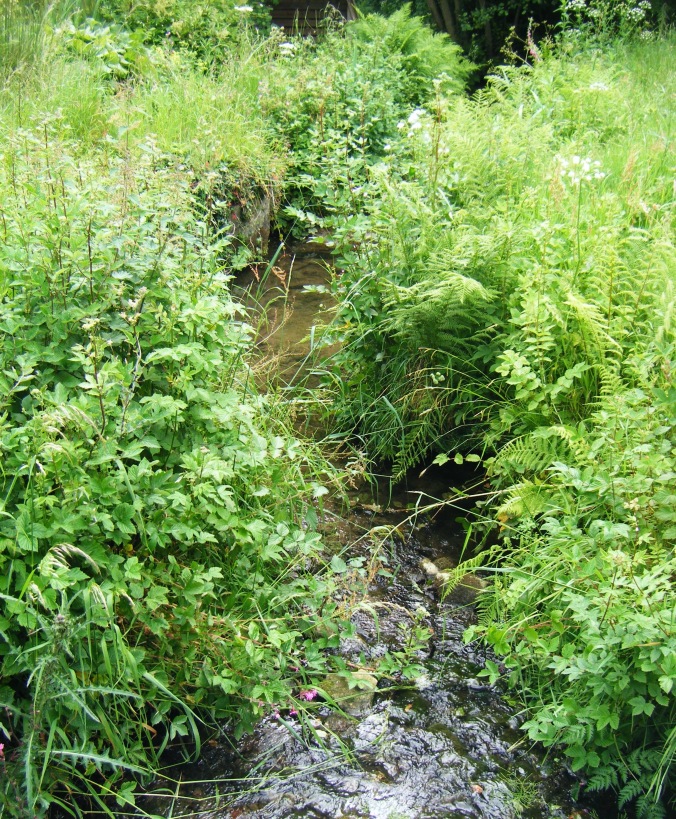 We step over the little bridge and follow the path up through coppiced willows.

It is a sight to see so many orchids dotted amongst the varied grasses in the meadow.

It is a magical spot, a haven for wildlife, and from here there is a good view of the south side of the property.

Returning across the stream and up again to the right hand side of the house, we make our way through the gap in the yew hedge, 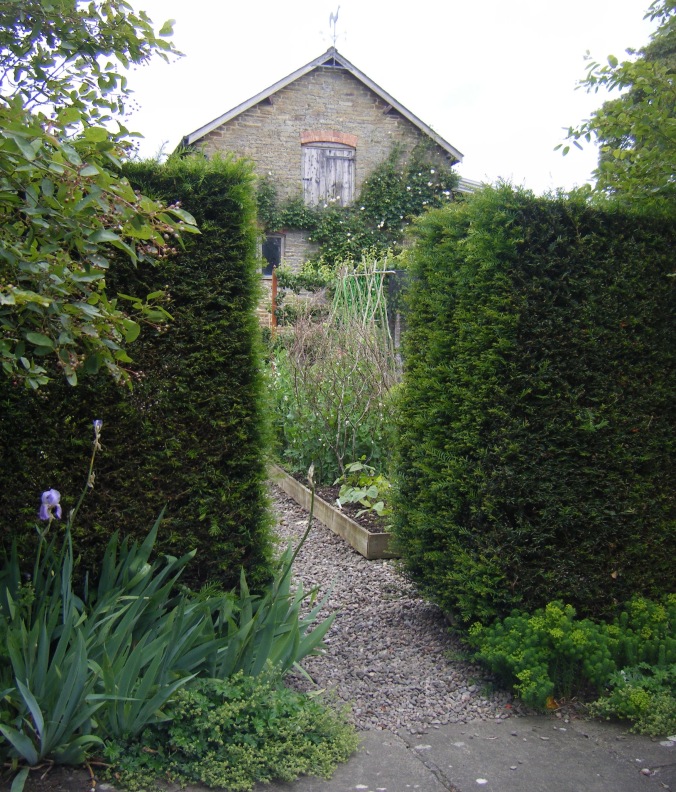 and into the very organised vegetable garden. A luxury having fresh produce literally on the doorstep. 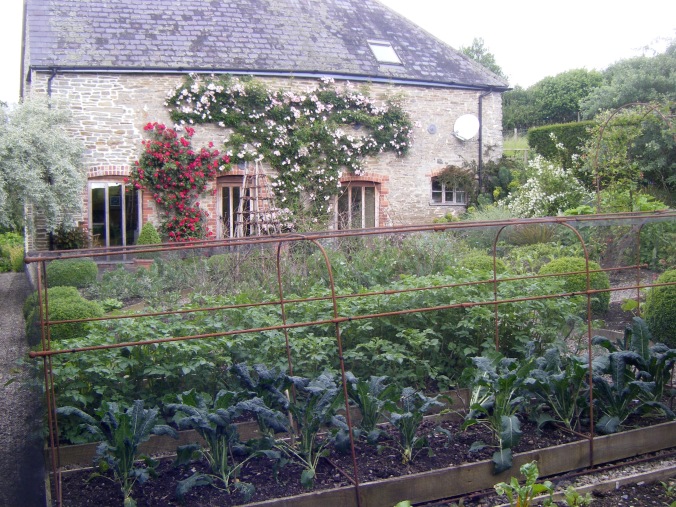 Pear trees are trained against the metal support; it is a heavy crop this year.

Climbing the wall of the house is the rich red rosa ‘Hamburger Phoenix’ and the soft pink rosa ‘Francis E Lester’. 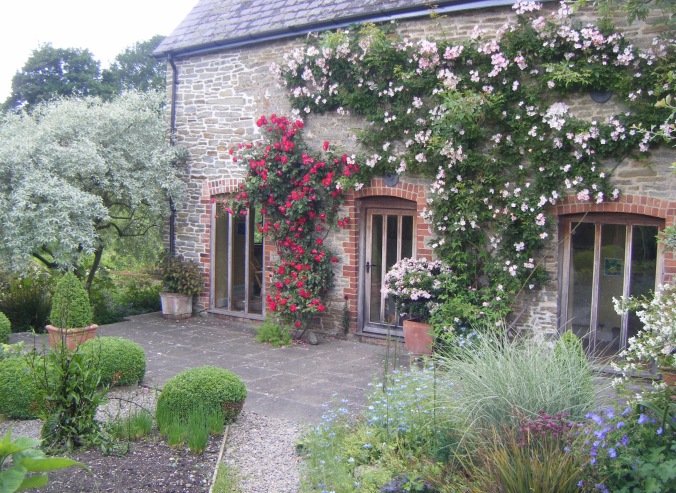 We take the path under the propped-up Eleagnus ‘Quicksilver’,

stepping through sisyrinchium, allium and geranium, the blocks of yew are quite a height.

It is not an Open Day, but James brings us coffee and our favourite chocolate biscuits which we enjoy on the verandah. Here he explains his reed bed filtering system. 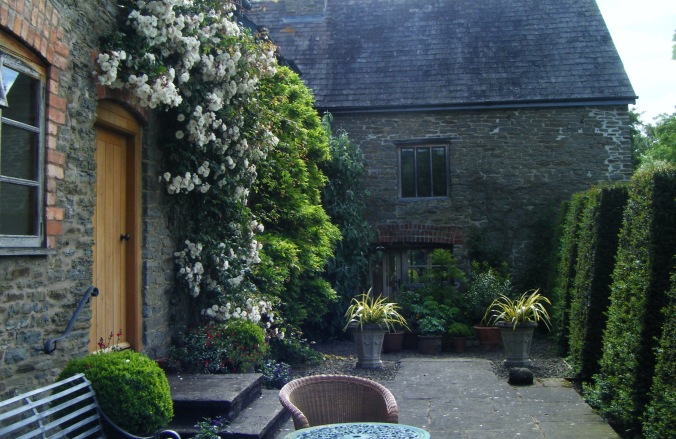 After coffee we walk the short distance across the drive to the glasshouse where the  reed beds are situated.

Under the bed of herbs is a hidden tank where waste from the house is piped. 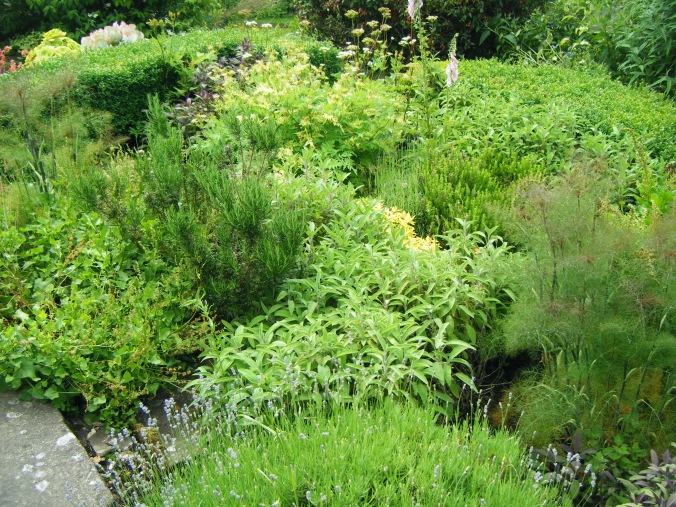 The waste is filtered through the first reed tank,

then through a second reed bed. There are two here and with the flick of a switch James can alternate them which he does weekly. 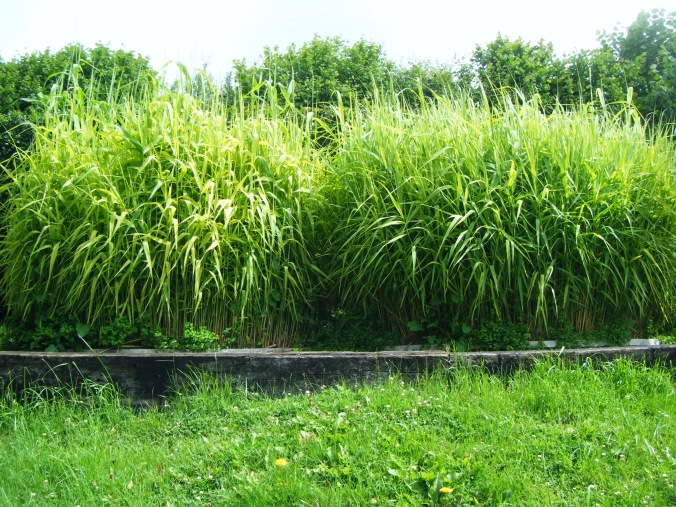 Another reed bed acts as the final filter. It is a clever system, inexpensive and does not seem to take up too much space. The reeds come from Norfolk. We wonder why more people do not adapt to a similar system, and suggest such places like care-homes might benefit, but James points out that medicines can be a problem and the reeds cannot cope with drugs such as antibiotics.

My friend Jill is particularly keen on the subject of sewage, and together we have learnt a lot. She lives closer to a plentiful supply of Norfolk reed than any of us, so I wonder what she is planning.

Upper Tan House is a delight. It is open for the NGS by arrangement in June and July. They like to keep the numbers of visitors controlled, as too much flushing creates a strain on the reed beds!