Not far from The Island (previous blog), just off the A27 near Romsey is a dahlia field open for the NGS.

Gilberts Nursery pride themselves in being growers of unusual plants and also specialise in Dahlias. ‘This may not exactly be a garden’, the yellow book describes, ‘but come and be amazed by the sight of over 300 varieties of dahlias in our dedicated 1 1/2 acre field’. So that is what we did. 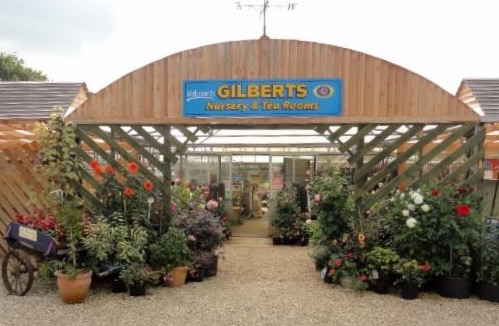 I have to admit that I have never really been a dahlia fan. Perhaps it is memories of silly childhood limericks and inappropriate colour combinations. However this year I seemed to have grown up a little and have begun to warm to this diverse flower. So many varieties with a long flowering season, here it was quite a sight.

Row upon row of dahlias of all colours, supported by netting and clearly labelled.

Originally used by the Aztecs as a source of food and medicine, the dahlia hails from Mexico. Its introduction as a food crop into this country at the same time as the potato during the 15th Century was, not surprisingly, a great success.

It was not until 1789 that the director of the Botanical Garden at Mexico City sent the dahlia to Antonio Jose Cavarilles, who was working at the Royal Gardens of Madrid in Spain.

The original plant was a the tree dahlia, dahlia imperialis which can grow to about 20 feet and has hollow stems which the Aztecs used as a source of water and water carriers. It is from this one type that we get all these different varieties.

Cavarilles in fact grew three new plant forms, dahlia pinnata, dahlia rosea, and dahlia coccinea and he named the genus in honour of Andreas Dahl, a Swedish botanist and student of Carl Linnaeus. 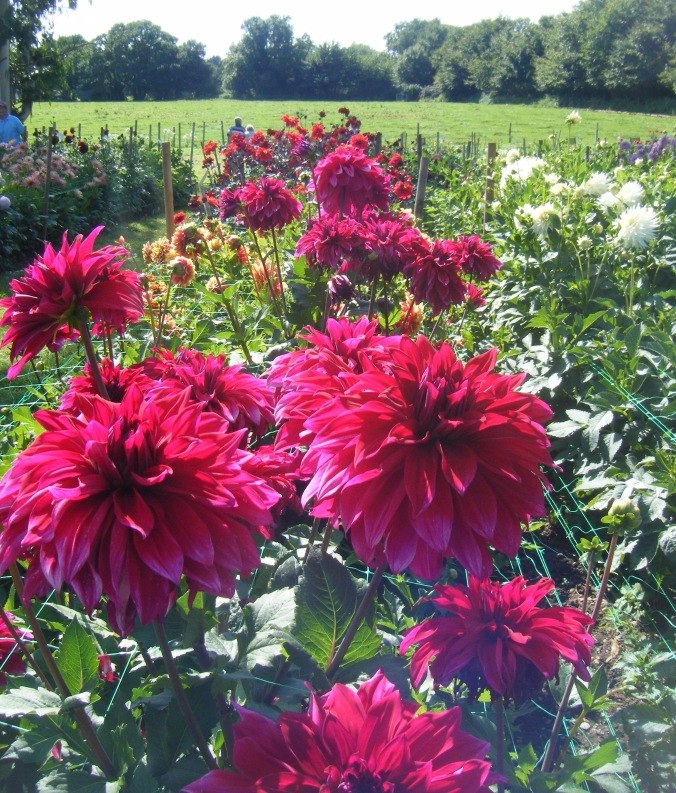 I have always been amused by the Americans who pronounce them ‘Darhlias’; well of course they are right, so how on earth did we start calling them ‘Dayhlias’?

Talking of Americans this is Thomas A Edison, a dahlia classified as a medium sized ‘decorative’.

There are in fact 15 formation classifications, more of which can be seen on the very helpful website of the National Collection of Dahlia held at Varfell Farm, Penzance,  https://nationaldahliacollection.co.uk/selecting-your-dahlia/, who are also supporters of the NGS.

A popular type is the neat ‘ball’;  this one is named Barbary Monitor, 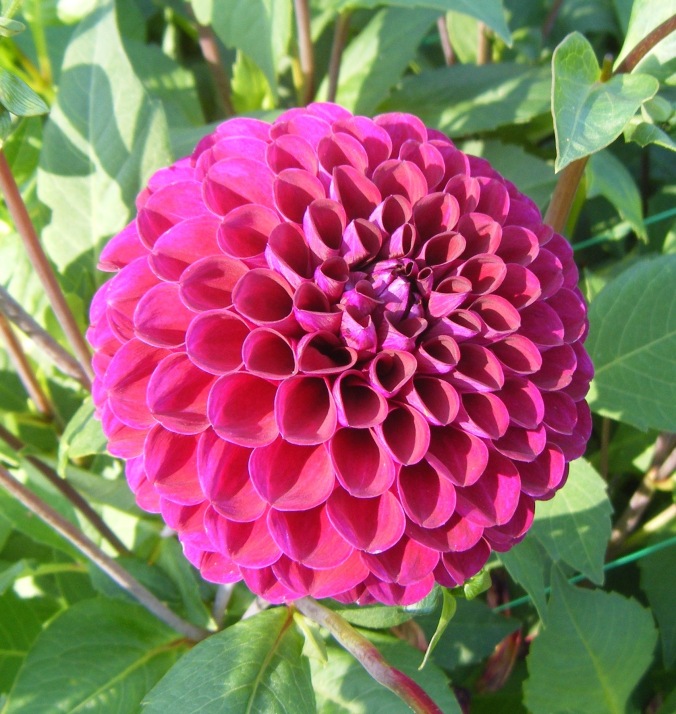 another ‘ball’ but in miniature is the Auroras Kiss.

There is the ‘miscellaneous’ type such as Albert Schweitzer, 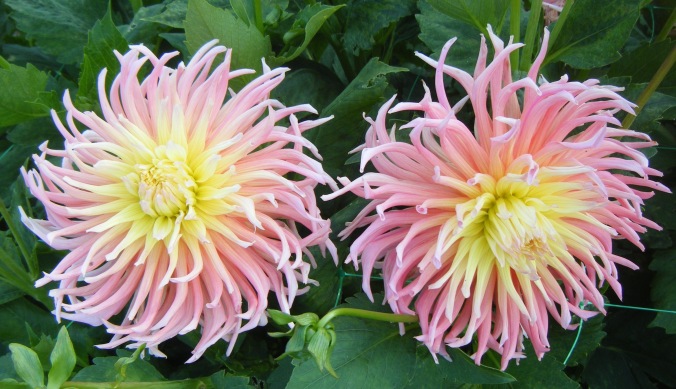 or the giant ‘decorative’ Alvas Supreme. 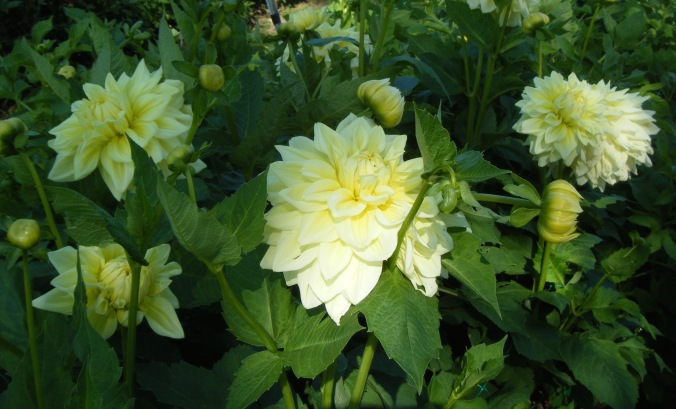 At the end of the field is the seedling bed, 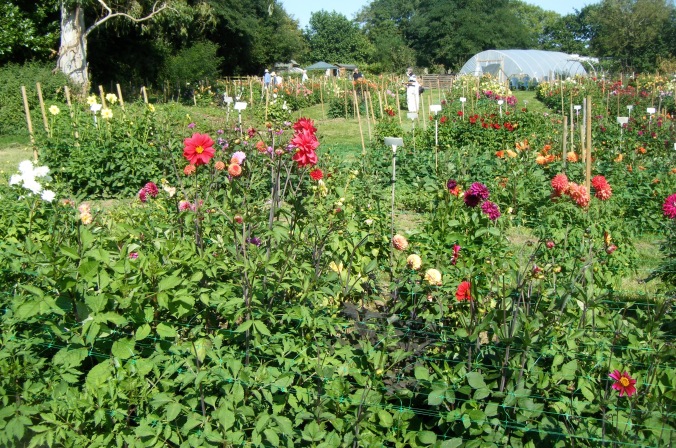 where you can sit back and enjoy the splendour. Hasn’t the plastic chair come on a pace; now fashioned in adirondack-style they can be purchased in lime green.

White Swallow is not yet listed but is probably of the waterlily type,

similar to the bright Kens Flame. 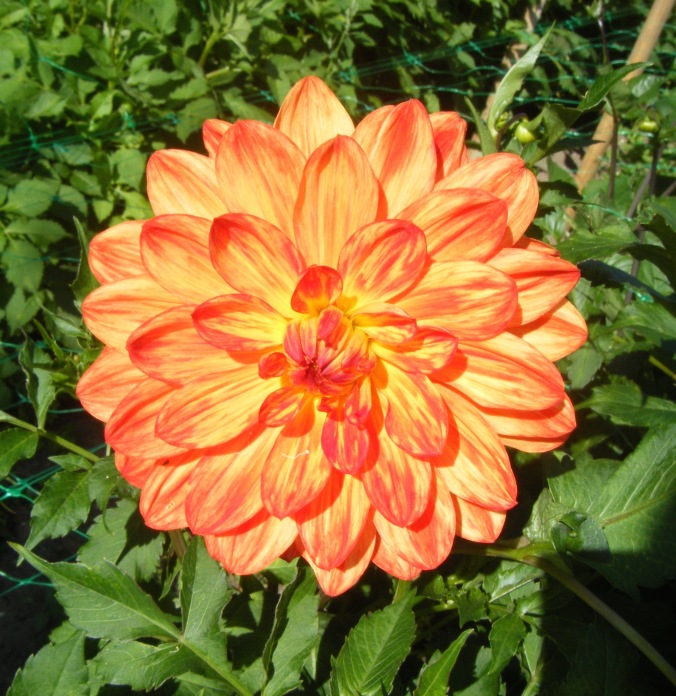 There is rather a magnificent type called the ‘collerette’, this is glorious Mary Evelyn, 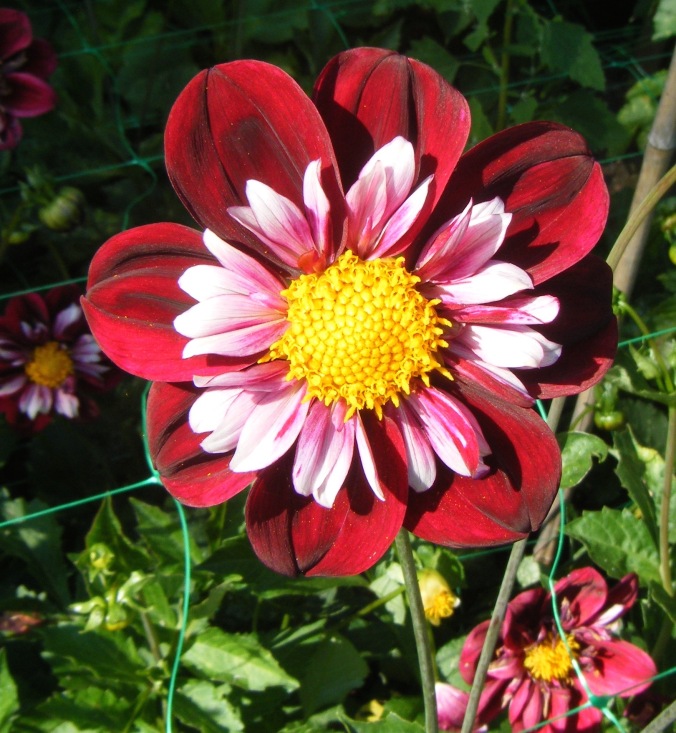 a contrast to the quieter Apple Blossom.

Bees seem to enjoy the ‘miscellaneous’, busy in the centre of Daisy,

It is  family-run nursery, with plenty for sale. I am anxious to purchase Pooh which I came across in another garden and while the young assistants set about searching amongst the pots I chat to Daisy who has found shade under the table.

Alas Pooh has proved to be a popular choice, for others have beaten me to it and all that can be found is a dishevelled specimen. Attacked by the wasps it is offered to me at a knock-down price. Never one to miss a bargain and combined with the assurance that all will be well with a bit of TLC, I am glad to take it home.

I am happy to report that Pooh is now doing hummingly well back. 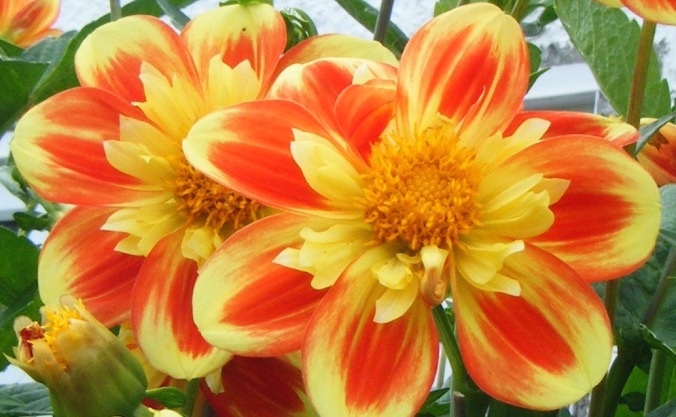 8 thoughts on “Gilberts Nurseries and dreams of dahlias (72)”