Yvonne kindly invited me to visit her garden at Hickling in the Norfolk Broads. I ran a search of Hickling village and found a very informative website http://www.hickling-village-norfolk.co.uk/ which even gives the current weather. Unfortunately I didn’t check immediately before I set off;  at home it was boiling hot, but when I arrived at Hickling over an hour later there was a decidedly chill wind.

Black Horse cottage is nothing to do with either a horse or even a bank but is a rebuild of the premises once owned by the village butcher. It is hard to believe now that cattle once grazed in the field behind before they were slaughtered in the barn and sold through the front window.

Entrance to the garden is to the right hand side of the property where a narrow path runs through luxuriously green planting, between a small dyke and the neighbour’s fence.

The honeysuckle from next door is keen to be on this side of the fence,

and to the left, Black Horse cottage garden is revealed through the foliage.

At the end of the path is a sturdy tree house supported by willows.

Yvonne was widowed a few years ago and the garden, over two acres, is quite a size for someone on their own. Engaging the help of garden designers Robert and Kathy Lane, good friends and neighbours, the garden has been given an uplift and she is able to enjoy the space again.

The conifers beloved by her late husband have now grown large and in order to cope with size Robert advised removing their lower branches and so raising the crown. This not only does minimal damage to the tree but also provides a greater space for underplanting with shrubs,

or presents pleasant areas for sitting.

This tall pine, with lower branches removed stretches elegantly up seemingly into the shape of a pitch fork. 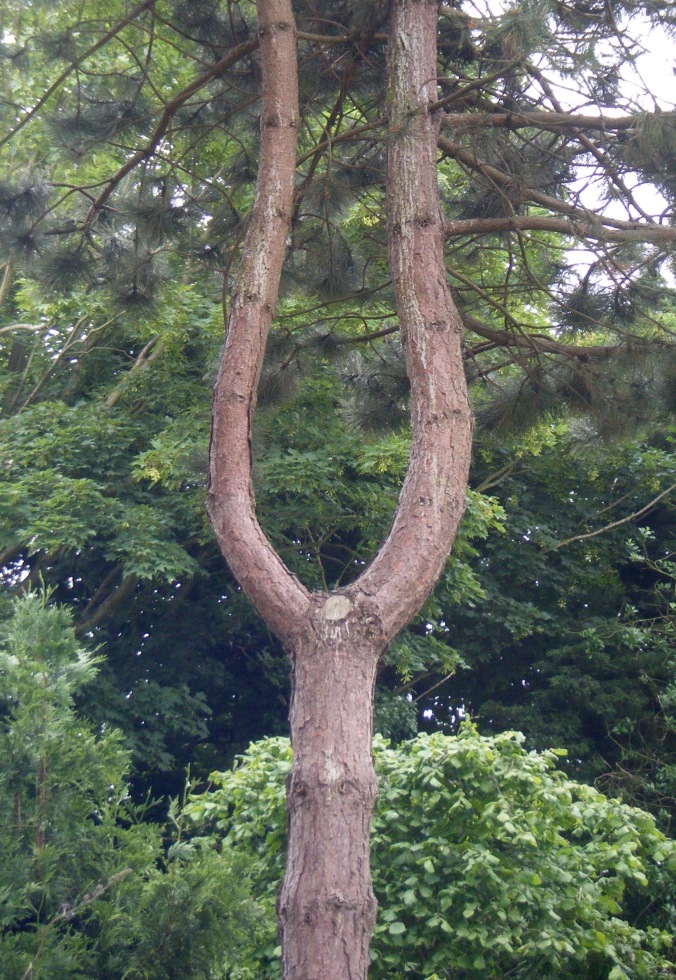 Shrubs include weigela florida ‘Versicolour. Robert corrects me on my pronunciation; it should be with a ‘v’ not a ‘w’ taking its name from the 19th century German botanist Professor C F Weigel.

From the same family with sulphur-yellow flowers and good autumnal colour is the bush honeysuckle Diervilla x splendens, named after a Frenchman this time, a surgeon, Dr Dierville, who first introduced this genus from the Eastern United States in the early 18th century.

Clearance work has also opened up a fine view of the distant tower of St Mary’s Church. 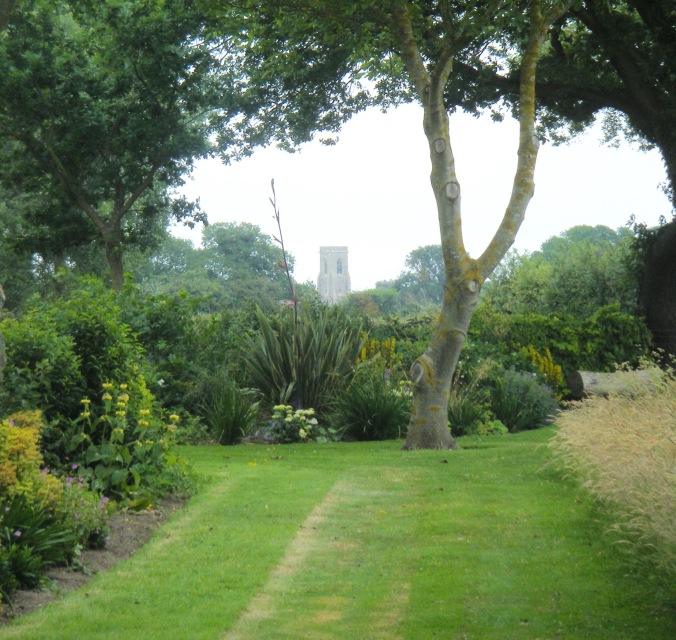 We move around the garden on the neatly mown areas. In places the grass has been left to grow or ‘no mow’ as Robert calls it,

and other areas have an in-between cut. 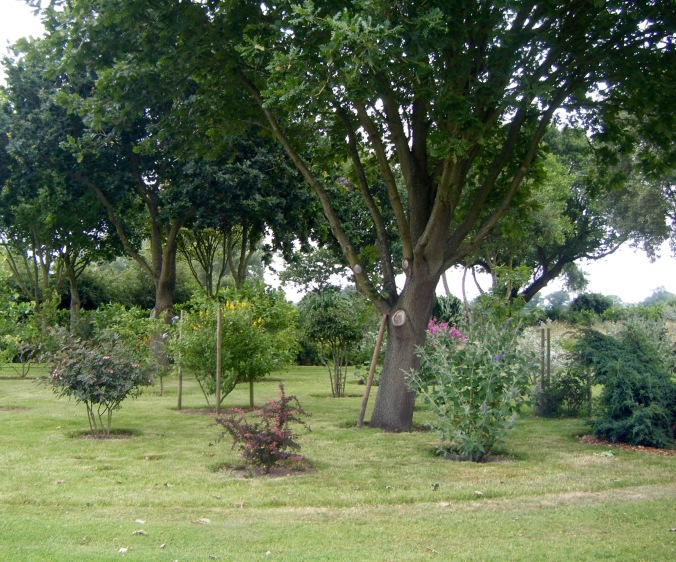 I admire the soft yellow flowered jasmine humile, too tender for my garden,

Closer to the house the borders are filled with colourful perennials,

and water lilies grow in the small tranquil pond. 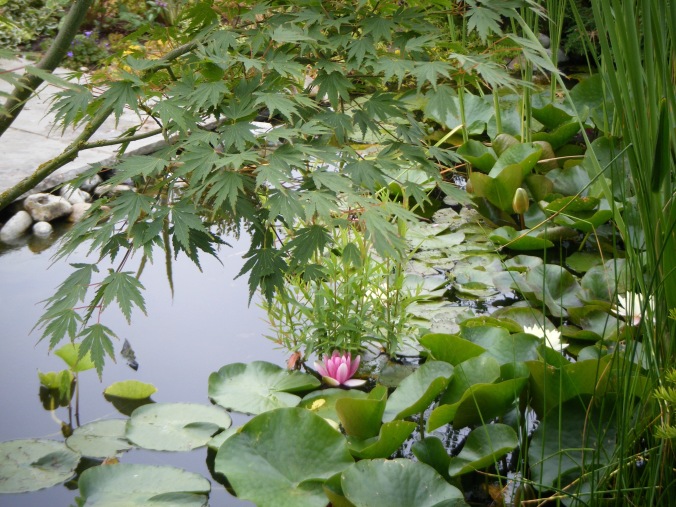 You would regret sowing bulrush by a small pond, but these, made of steel have the advantage of not being invasive and  looking most elegant. Made by James Barrett-Nobbs in Suffolk they can be found at http://acornforge.wixsite.com/acornforge/blank-cts5.

Cutting flowers are grown in the vegetable garden and part of this area has been given over to friends who use it as their allotment, providing Yvonne with a fresh supply they must welcome being in such an attractive garden. 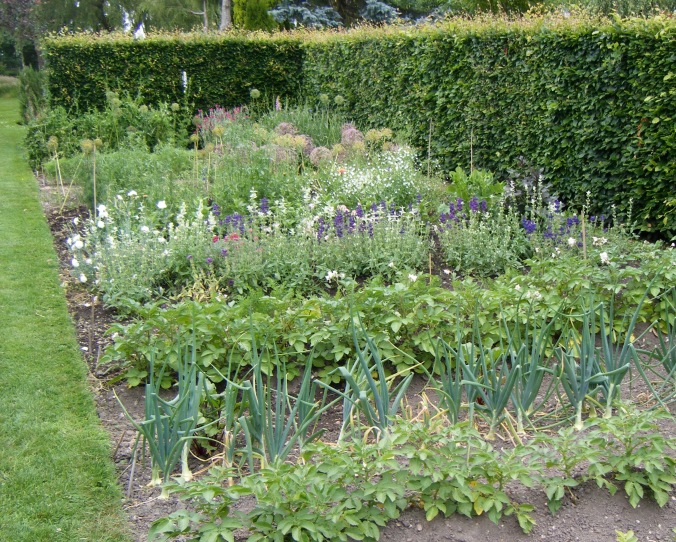 There is quite a collection of roses; climbers include this bright pink rose spiralling up the free standing apple tree, 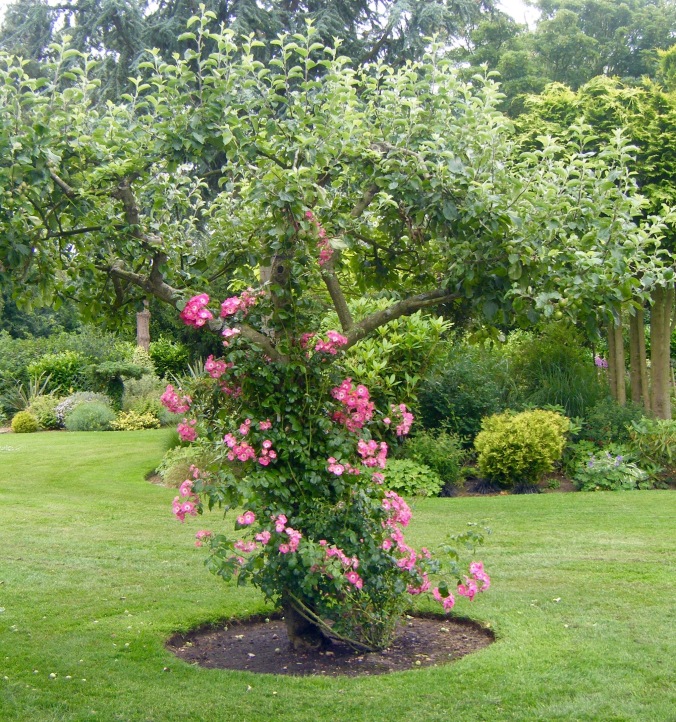 and it is good to see two NGS beneficiaries are represented; Rosa Macmillan Nurse a bushy, fragrant, repeat-flowering shrub rose, 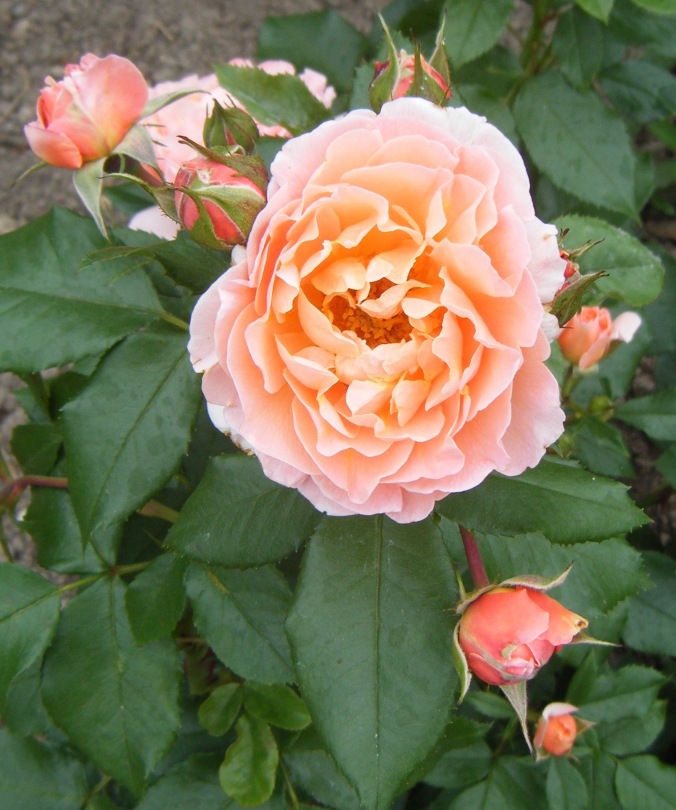 We have arrived back at the house where against the wall trachelospermum jasminoides pairs with a variegated silver euonymus,

and by the back door is a useful arrangement of herbs.

The selection of roses and perennials, a kitchen garden and the many mown walkways circulating around the mature trees and spacious beds will hold any visitor’s interest for quite some time. There are plenty of places to sit too. Yvonne has nobly decided to open for two consecutive days this coming weekend 15th and 16th July between 12 noon – 5pm. A relaxing place to sit awhile and enjoy a home-made tea.

2 thoughts on “Black Horse Cottage, the art of raising the arboreal crown. (56)”