The Norfolk NGS have for the past few years taken a stand at the Sandringham Flower Show. Tucked away in the Horticultural Marquee it has been hard work trying to compete with the commercial growers with their fine displays of clematis, roses and perennials. 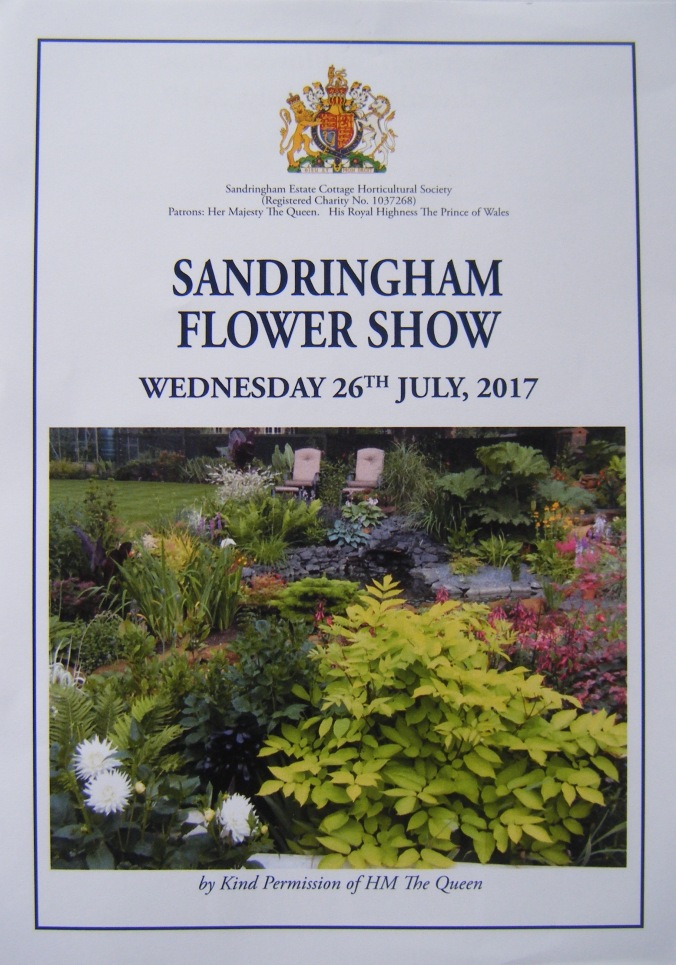 This year, our ninetieth anniversary we were invited to have our own marquee situated on the Royal Route. The show has been running for 136 years and is organised by a hard working and efficient team of volunteers. David the Chairman rang me sometime last autumn to chat about the stand, and suggested in the nicest possible way that the stand might benefit from a little more than just a little old grey haired lady with a pile of booklets.

I quickly checked in with my hairdresser and under my highlights wondered how on earth to fill that empty space 6m x 6m marquee.

The answer is you call upon the most artistic and professional of your garden owners to help; Karen Roseberry who lives at Yeoman’s Cottage (open on Sunday 20th August) had already created some eye catching posters for us that we have displayed along the empty walls of the busy corridors of the Norfolk and Norwich Hospital. Sandringham was one of the original gardens to be open in 1927 and has supported the scheme continually every year since. We felt it important to display this historical information and so Karen created a poster especially for the show:

The next problem was how to display them? Fiona, co-County Organiser came up with the idea of trellis. I pegged out the area on my lawn and decided that three 6′ X 6′ trellis panels would be suitable. However not so easy to find; yes everyone could supply 5ft but not 6ft and time was running out. Fakenham Garden Centre, regular advertisers in our booklet promised to deliver by Monday, just a day before we were due to set up the stand, and they did.

Matt, who once trained as a gardener at Sandringham has always lent a hand at the show. Well, not only a hand, it is usually a truck which this time he loaded up with the trellis panels, wheelbarrow, plants and any other props we might have lying around. With my car also filled to capacity we set off  to the show ground.

We opened up our empty marquee and Martin, the Head Gardener at Sandringham kindly lent us two arrangements from the main garden. Lacking suitable containers, we were not exactly sure how to use them.

Matt hammered in the angle irons and tied on the trellis. Head Office supplied some banners, the type that pull up and stand alone, great in an office but on uneven grass they need support. We decided to reject one of the banners, a white haired lady serving tea, purely an act of ageism I fully admit.

Soon we filled the space. On the lefthand side we displayed the merchandise from Head Office, tea towels and bags but sadly no aprons which had already sold out and inevitably was the one item that everyone wanted.

In the centre the display of posters was enhanced with plants purloined from our gardens. 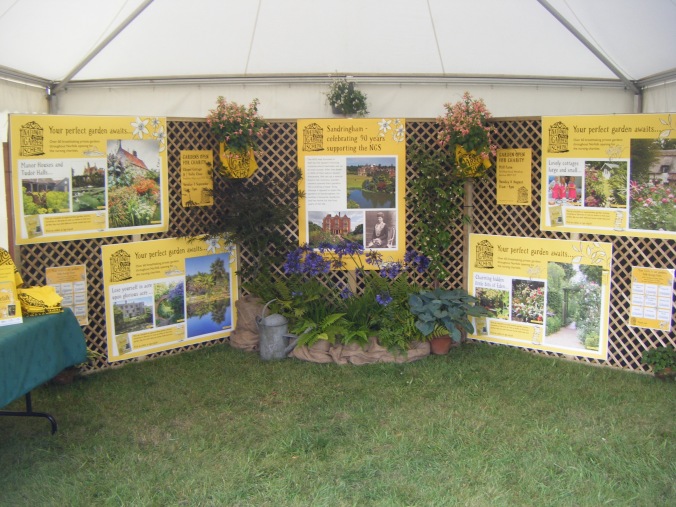 And on the right, the raffle, table and chairs. Celebration fruit cake and tea pot would arrive the next day. 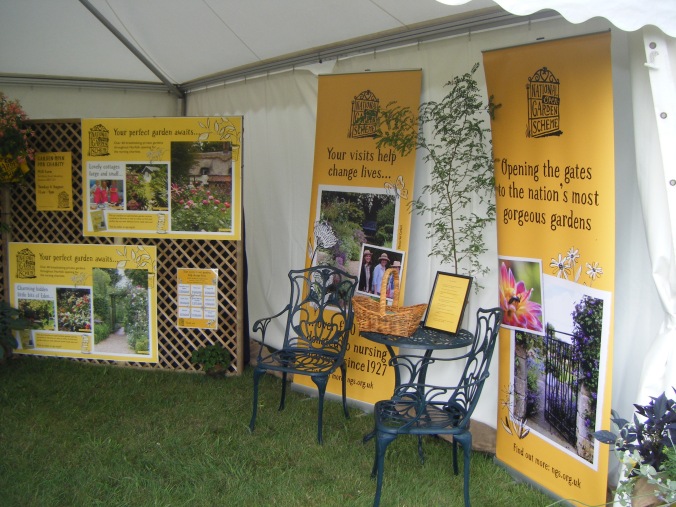 Traffic is not the show’s speciality so the next morning the team, five of us in all arrived in good time. We were surprised to find spectators already seated with their own chairs opposite our marquee.

NGS Chairman Martin McMillan and his wife Pat dropped in from Cheshire, whilst the Chairman of the Sandringham Show briefed us on protocol. On arrival of the Royal party everyone should remain inside the marquee except for Graham, NGS Norfolk publicity officer who would look after HRH the Duchess of Cornwall, and myself as County Organiser would receive HRH the Prince of Wales.

It was a long wait. The route was roped off. Police were posted along the way, 60 of them to be precise. The sniffer dogs came through and thankfully never found the fruit cake. The crowds gathered; some 20,000 visitors were expected. And while the Royals were enjoying themselves in the Wl tent,

we waited. A voice was heard at the back of the tent; security had not allowed my husband in. Although a young policeman had insisted on standing in front of Daisy, we had built up a good relationship and when I explained the low security risk he kindly allowed him in. We continued to wait.

Somebody asked the way to the open garden, only to be disappointed that it was just our stand.

And then the rain came. Luck would have it as I was not sure how I was going to herd our enthusiastic Chairman back into the tent.

The royal umbrellas finally arrived and Graham, a bit of a charmer,  took the Duchess aside, helped her on with her coat and explained that the reason she was here was because her husband was our patron.

Then the Patron himself arrived, so versed in this line of work he effortlessly moved around greeting the team until I introduced him to my husband.

I would like to add at this point that this is not just any old husband but my chief editor, under gardener, and complete hardy perennial and although he nearly missed the boat this time, he is always there for me. I quietly disclosed to HRH that husband and he had shared a garden some sixty years ago at prep school, and thinking that this might go over his head I was surprised when in a moment of recognition he remembered that husband comes from the Channel Islands.

Prep school chat ensued and the conversation moved on to Queen Alexandra, Sandringham and the National Garden Scheme.  Prince Charles appeared to enjoy his visit, and the highlight for all of us was he concluded his visit by announcing that he was justly proud to be our patron.

The next day a picture of Daisy appeared in the Eastern Daily Press with three NGS ladies, not a grey hair amongst them!