It was a dark threatening sky descending over Burmington Grange on a Saturday last month. Burmington is a small rural village with a population of just 164 and is situated a few miles from Shipston-on-Stour. Garden owner Patrick who greeted us at the gate, thought I was coming on a bike and although staying with friends nearby I was very relieved to have taken the car!

We began our tour by looking to the right of the house where there is an ordered pattern of greens in a variety of texture and form. It is the lines of silver willow-leaved pears Pyrus salicifolia ‘Pendula’ that look so distinctive against the dark storm clouds. 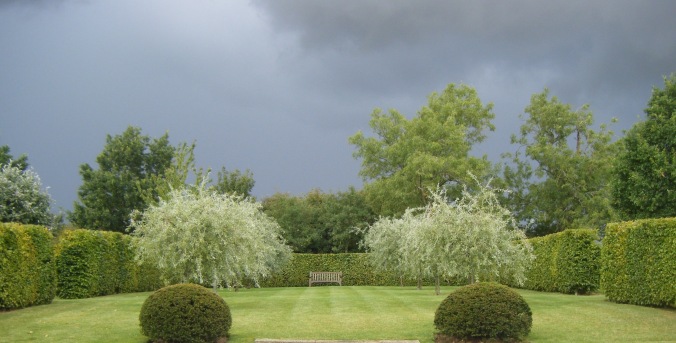 We did not delay but hurried across the immaculate drive to where the gates were waiting wide open,

and found ourselves in the colourful and productive fruit and vegetable garden. 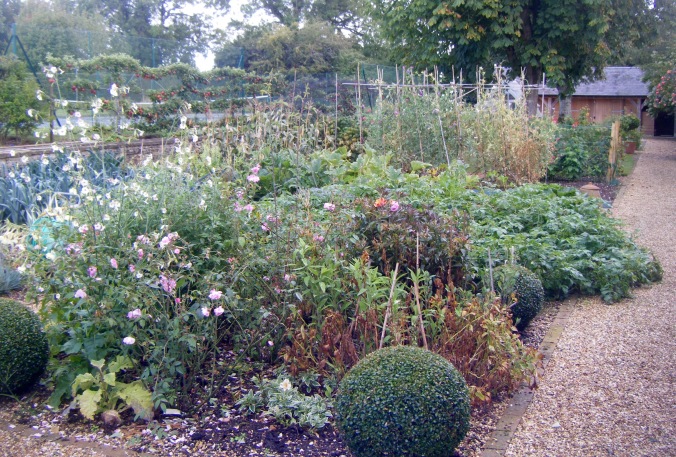 Looking down from above the Kiwi actinidia deliciosa seemed to wave us on,

and we hurriedly admired the almost thornless tangle of Cratageus tanacetifolia standing high above the wall brimming with red berries,

and looked on enviously at the pears hanging from their outstretched branches trained against the wall.

A cloudburst forced us to take shelter in the neat little greenhouse where for some time we waited for the storm to pass whilst longing to pick one of those juicy red apples.

Eventually the rain subsided and we walked through into an enclosed garden in front of the Barn.

It is just the perfect place for a pool, south facing and sheltered. At one end, amongst the variety of shrubs, salvias, sedums and aeonium blend together, a contrast to the triangular topiary. 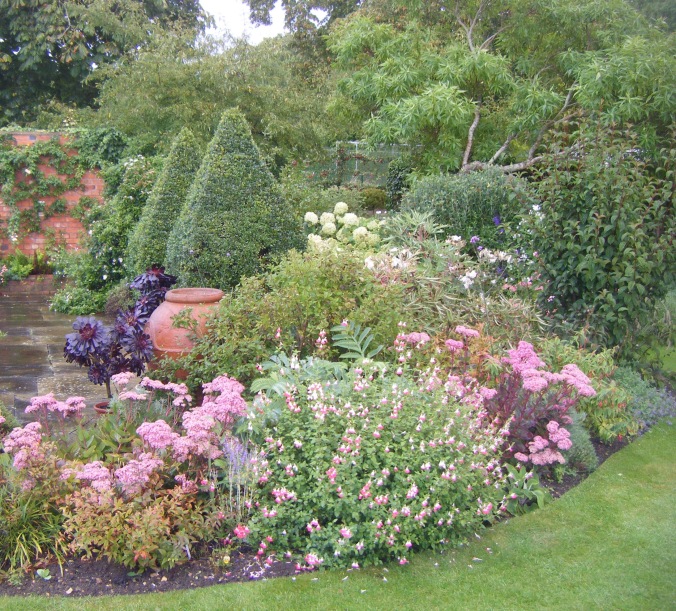 Along one side of the pool tall ‘Italianate’ yews divide but do not hide the swimming area, and on the other side is the wall from the vegetable garden which is adorned with a collection of climbers.  The pool is looking a little more enticing now the sky has turned blue.

At the Barn end, large pots are planted to perfection, overflowing with Salvia ‘Amistad’, Canna and Helichrysum. 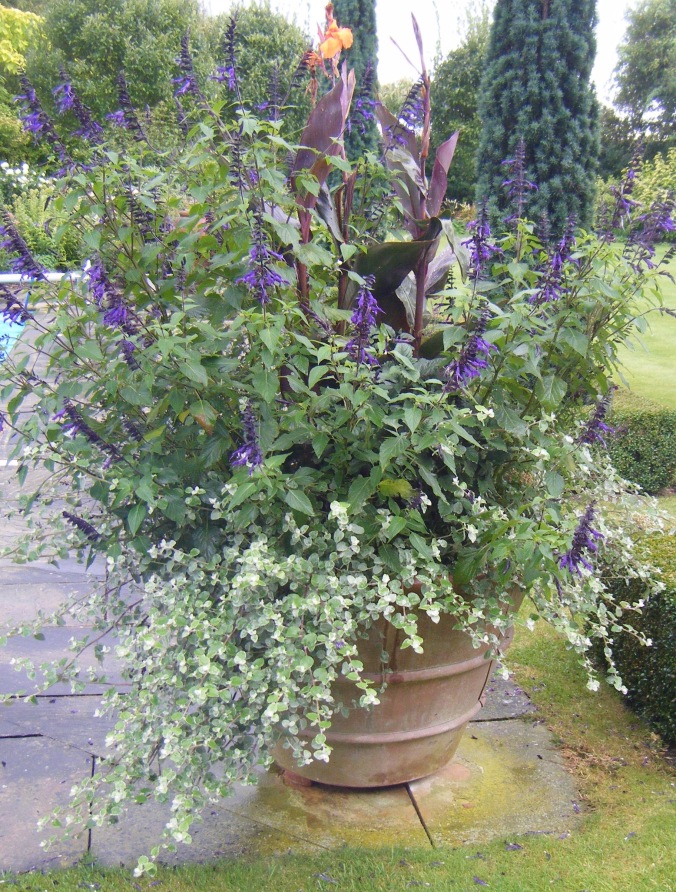 This is a sheltered area and we decided to take tea served in the Barn while the weather was making up it’s mind.

The garden has an air of maturity and it is hard to believe that it was conceived only 13 years ago. The open door in the wall beckoned us.

Through the crab apple trees we looked down to the sunken garden laid out with roses, herbaceous plants, and fine lollipops of Portuguese laurel, prunus lusitanica 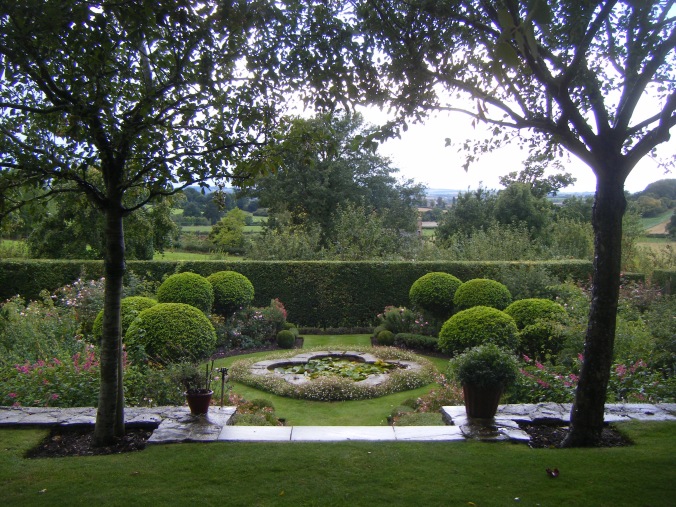 The crisp neat edges of the verdant lawn paths and neatly trimmed lavender accentuated the relaxed habit of erigeron karvinskianus which dances around the pond.

Seen from all angles it is a delightful arrangement.

The yew has been cleanly cut, and ‘gate posts’ are shaped into what are amusingly known as ‘Patrick’s thistles’.

We took the elegant steps up to the house and from under the tree we viewed the Warwickshire countryside rolling away before our eyes.

The spectacular Pineapple lily Eucomis grows at the foot of the walls of the house,

At the end of the terrace that runs along the front of house, is an enclosed garden seemingly made square by the clipped hedges which surround it,

but on entering it is in fact round, made so by the border that gently repeats its pattern of planting around a circular lawn.

A dip in the hedge provides a view of the unblemished countryside. 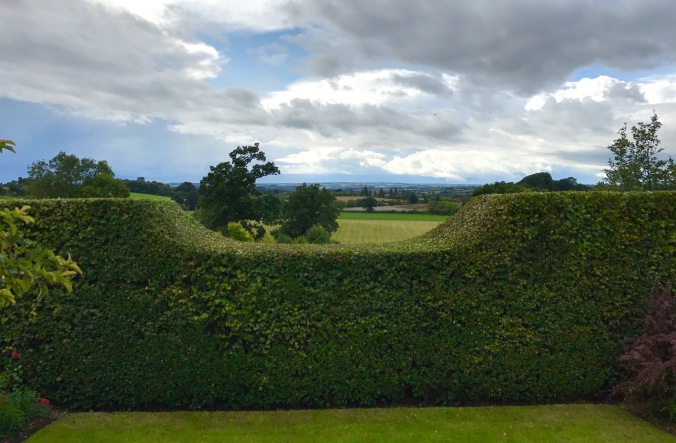 Moving round to the shaded side of the house we found an interesting range of trees,  growing in a less formal area.  The meadowy grass has paths mown through and is kept away from the base of the young trees like this Paper Bark maple, acer griseum.

The berries are brightening and leaves turning on this Sorbus aucuparia.

Returning to the house a cube of variegated box caught my eye,

and a fine yew cone marks the corner from where we walked back along the terrace in front of the house. 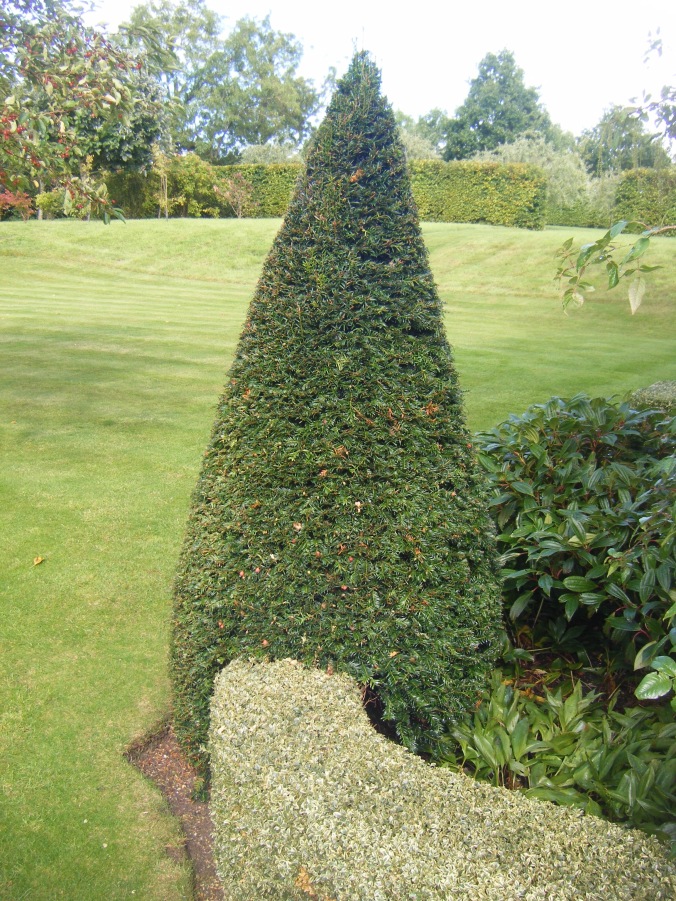 Once more we admired, the charming arrangement below and in particular the selection of colourful salvias. 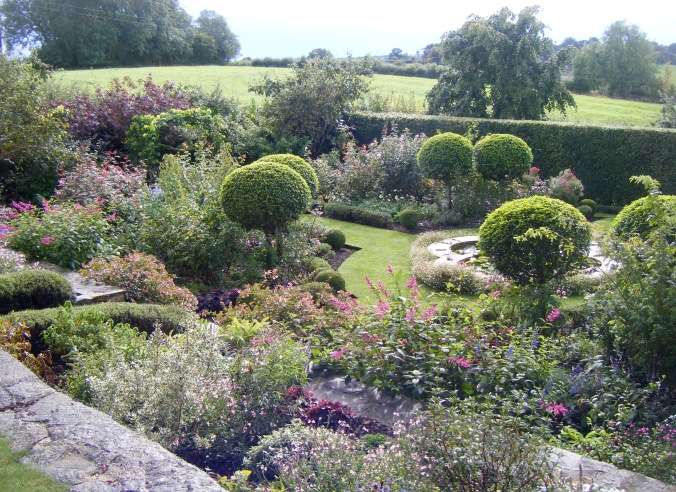 Too wet to explore we were happy to gaze at the bountiful apple orchard over the smiling gate, 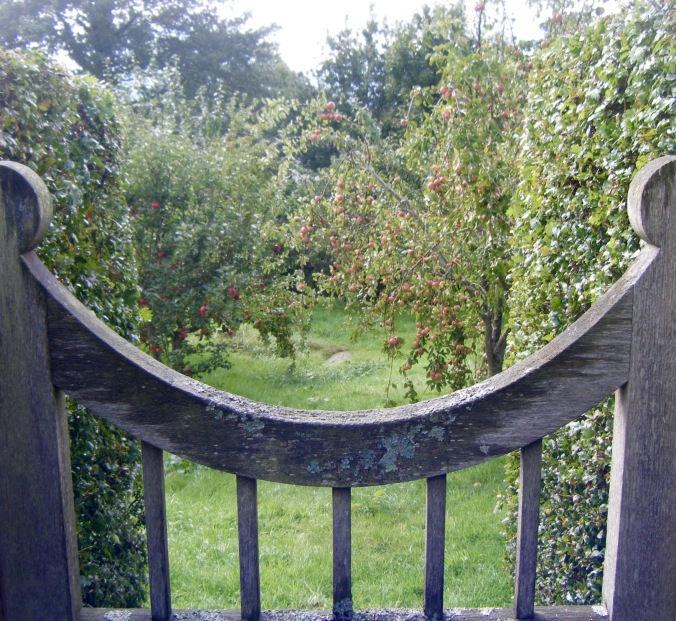 A family garden, immaculate and in a perfect location.  Perched upon a hill the terraced garden embraces the view while parts remain well sheltered from the wind. Opening in the second week of September which may seem late in the season for garden visiting. Burmington Grange with its rich planting displays a plethora of colour and demonstrates that Summer is by no means over.  Despite the rain it has been a delightful afternoon and even the Dahlias show they can weather a storm. 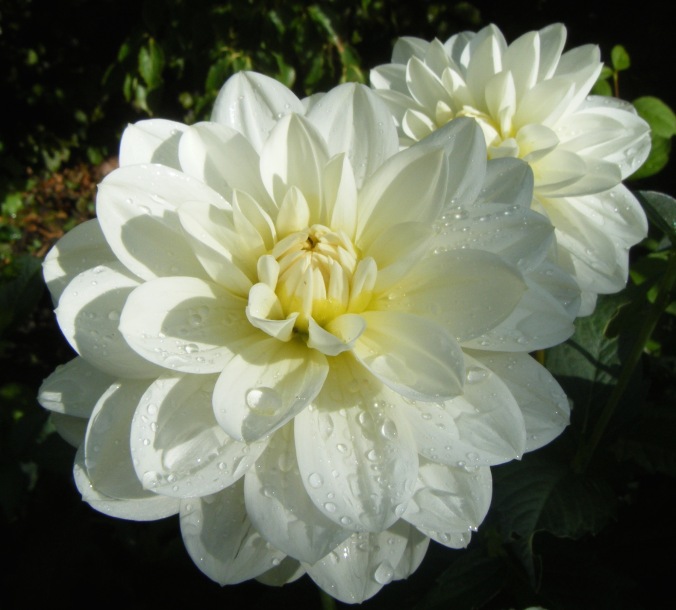 14 thoughts on “Burmington Grange, where hedges, terrace and thistles triumph on a stormy day. (77)”