Arley Hall, one of the original gardens to be opened for the NGS way back in 1927, opened its gates for the Scheme this year on the 6th August.

The visitor is dwarfed by the immensely tall pleached lime avenue lining the approach to Arley Hall in Cheshire. Planted in 1856, I wonder at having to get up there to give these trees an annual clip.

Not many entrances have a Cruck Barn; just right of the clock tower arch, it was built in about 1470, the same time as the house. The ‘crucks’ I gather, are the strong pairs of oak beams curving up from the floor to the apex of the roof.

The  garden has been created by the same family over the past 250 years and is considered to be one of Britain’s finest. The map advises us that it will take several hours to walk round the twelve acres. So we set off through the ornate iron garden gate. 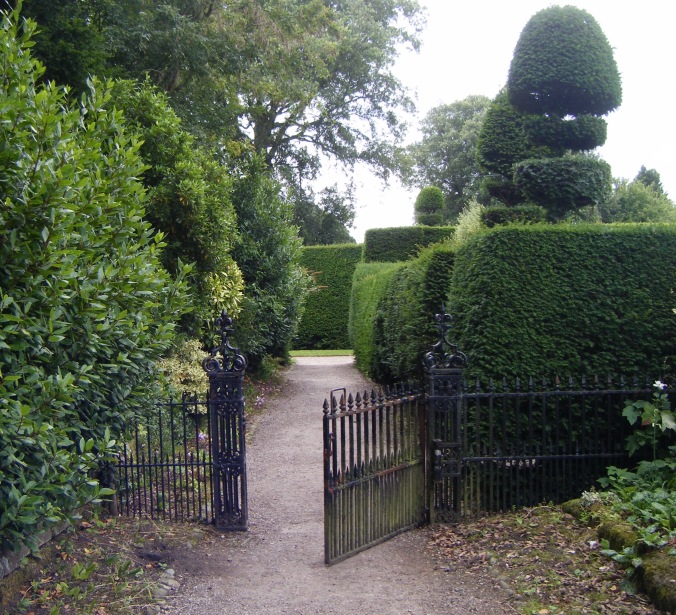 A series of charming areas have been designed here; they are like the warm-up to the great act that follows. At one end of the pretty Flag Garden, white agapanthus grow above dainty white clumps which spill out of terracotta pots and in spaces amongst the paving stones.

At the other end where the scent of roses fills the air, lavatera and lavender surround the feet of this nonchalant chap.

Then, crossing the avenue lined with its rigid high hedges of yew, 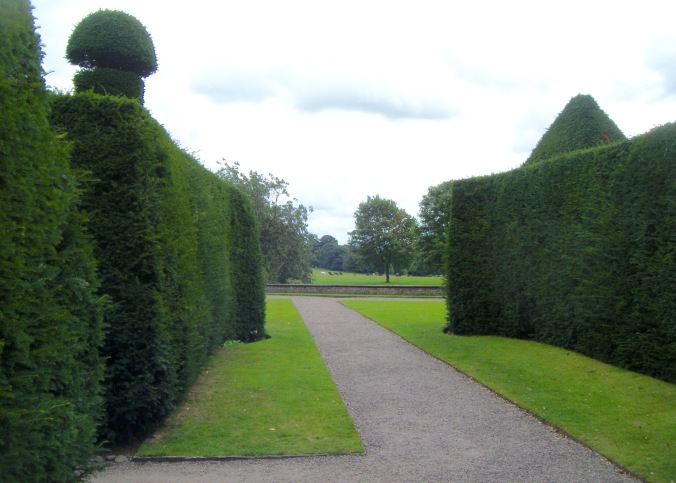 an occasional splash of red tumbles out of the green walls; it is the Scottish Flame Flower tropaeolum speciosum, whose origins are nothing to do with Scotland having been introduced from Chile by the Cornish plant hunter William Lobb during the mid 1840s .

Topiary echoes the stone finial centred amongst the nasturtiums in the Herb Garden, 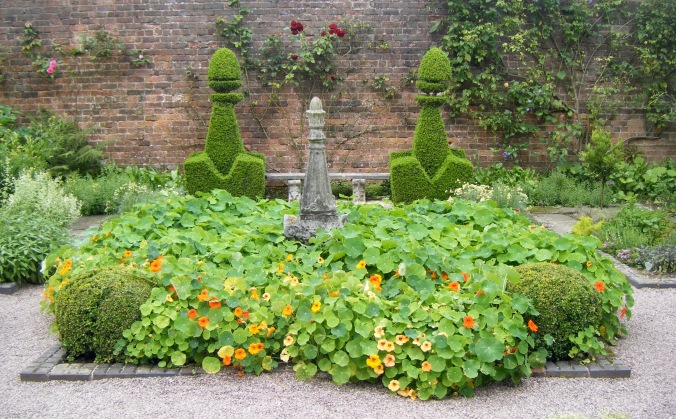 where herbs are laid out in striking patterns.

Finally in this line up is a small scented garden, probably at its best in Spring, it retains a charm throughout the year. 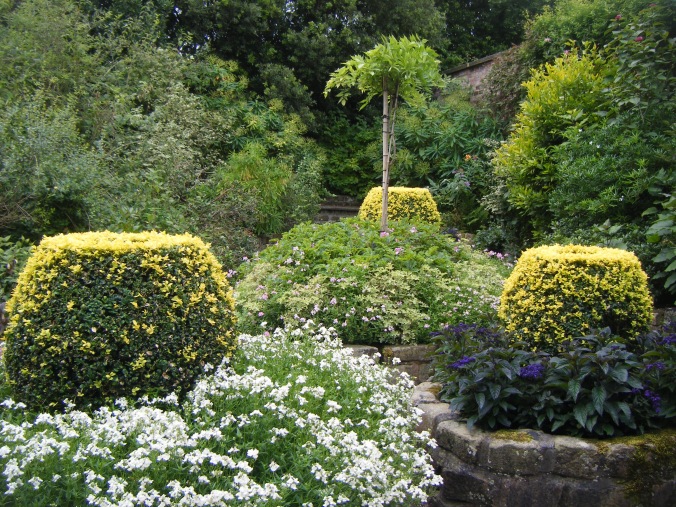 The aroma right now is coming from the honey-scented  Itea illicifolia growing against the wall to the right of the gate which stands open to the walled kitchen garden.

We first explore the long glasshouse, The Vinery built in the 1870s where, amongst the figs and vines there is an explosion of exotic plants :

The evergreen Australian Bluebell Creeper sollya heterophylla with its nodding blue bell-shaped flowers twines one of the upright poles, 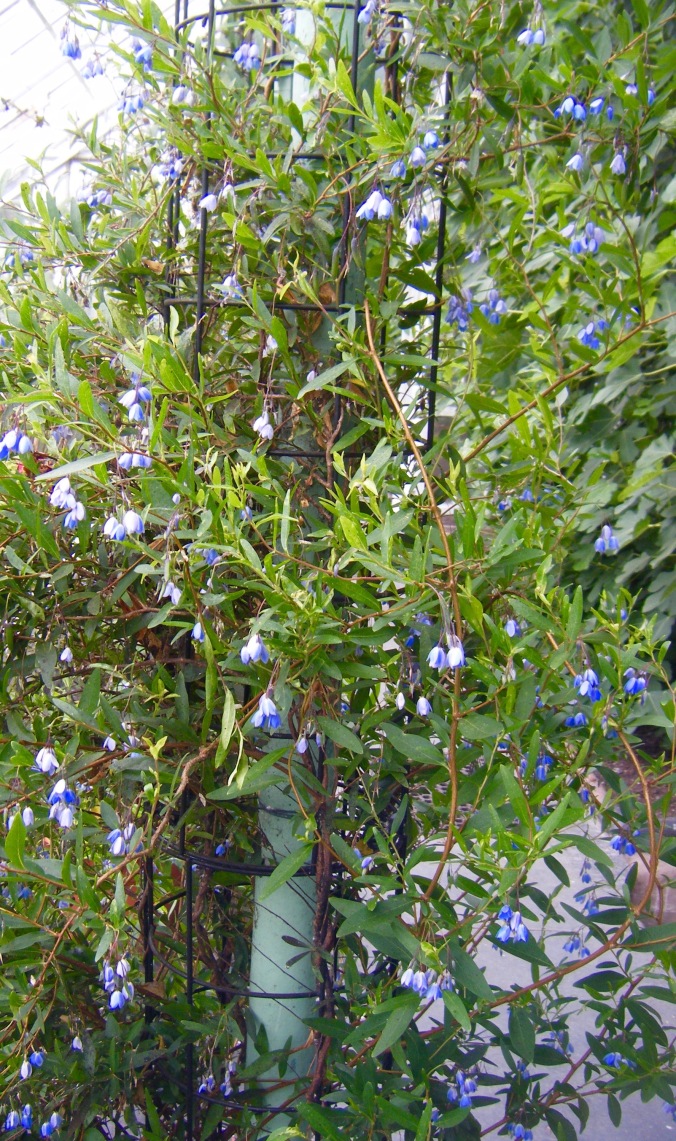 the tender and unusual Iochroma australe from South America,

and the popular Passion flower,

Out in the garden sweet peas adorn wigwams of bamboo amongst salads and vegetables all arranged decoratively in raised beds.

Brought over by the present Viscount Ashbrook from a previous family home, Castle Durrow in Ireland, is an intricate white arbour, the perfect centrepiece for the floriferous walk.

Even larger than the Kitchen Garden is a further Walled Garden, where we find this friendly beast.

It is a vast space, and an aged photo taken from the informative display-boards in the old stables, shows how in the 1940s and 1950s this area once earned its keep with rows of fruit trees with vegetable beds behind. 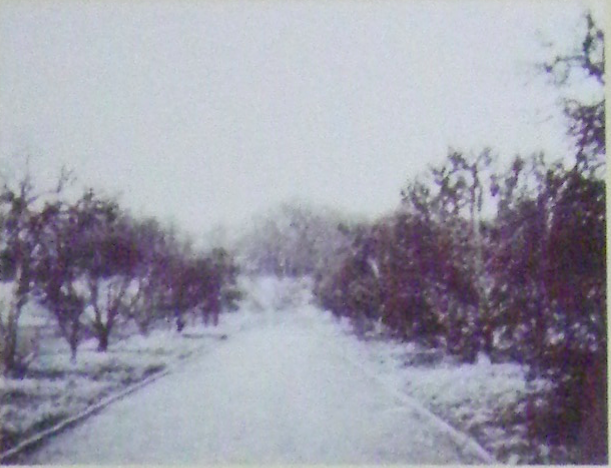 During these years the garden was closed for the Scheme but thankfully for us market gardening ceased to be profitable and the garden, having suffered much neglect over the years began a programme of restoration. The gardens were opened to the public in the 1960s and once again for the NGS too.  Now it is a delightful area with ornaments and mown green lawns edged with herbaceous borders,

with a formal pond and gentle fountain as the focal point.

We exit this area through the magnificent gates,

and find ourselves admiring the long herbaceous borders for which Arley has become so famous. These double borders can be seen on a plan of 1846 and it is thought they were the first of their kind to be planted in England.

Originally stretching in unbroken lines running along the brick wall on the north side and yew hedge to the south, the beds were broken up into five sections with yew buttresses some thirty years later.

The watercolour by E. A. Rowe of 1892 illustrate that the borders have remained unchanged today, except for the gravel path which has been replaced with grass.

The alcove situated at the west end was built in 1790 and is now a venue to tie the knot.

We slip through the hedge on the south side,

and look towards the eighteenth century Tea Cottage once used for garden tea parties and where shrub roses are underplanted with a variety of hardy perennials.

Through the spires of verbascum we can’t help but notice the fantastical cylinders of evergreen oak Quercus ilex growing here since the 1860s; there are fourteen in all. 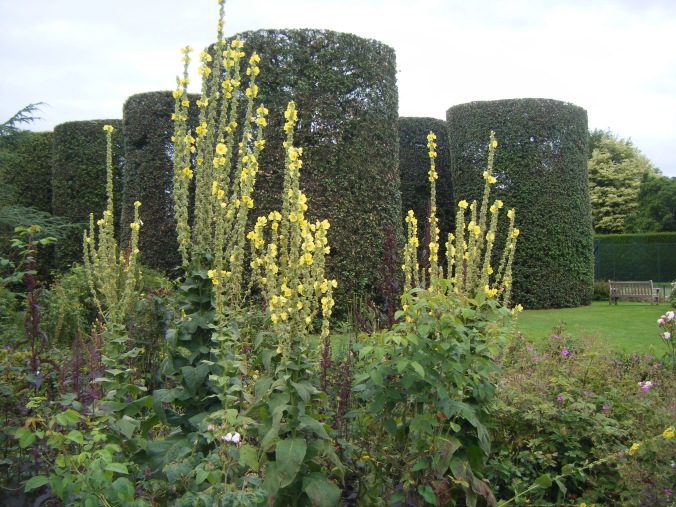 They are impressive in stature especially looking up from the sundial circle.

Just off to the side is the Rootery, a type of rock garden combined with a romantic woodland dell of ferns and maples, it comes alive in spring with the flowering azaleas.

Nearby is the fish garden; fish swim in the pool and, at the four corners of which is a splash of purple agaretum beneath the arching and delicate stems of the appropriately named angel’s fishing rods dierama mossii.

Finally we head along the Furlong Walk towards the house. Just as a reminder, a furlong is an eighth of a mile, 220 yards or if you are that little bit younger than me, 201 metres. On one side is the arrangement of gardens we have so enjoyed and on the other is the parkland. Cattle graze amongst old oaks whose outstretched arms bend to the ground in a graceful gesture reminding us that they too have been here for a very long time. 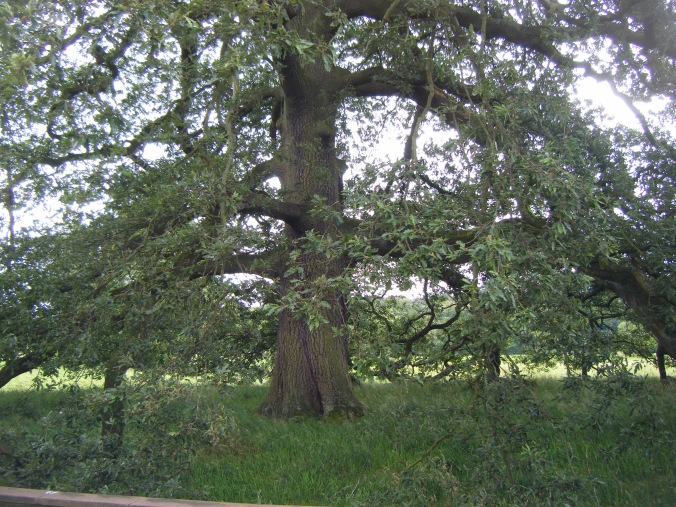 Each generation of this family have contributed to the evolution of the garden. The weather does not allow us to do justice to the Grove and Woodland on the east side of the Hall created by  the present Viscount Ashbrook over the past 30 years. However we have seen such variety; design and intrigue, history and progress, a paradise of plants and a nursery too. Arley Hall has its own very comprehensive website:http://www.arleyhallandgardens.com/the-gardens, but why not hear about the garden from Viscount Ashbrook himself who joins Mary Berry and Stephen Lacey on Tuesday 31st October 2017, tickets can be bought at https://www.ngs.org.uk/whats-new/news/post/the-glory-of-the-garden-with-mary-berry.