Cambridge was the hottest place in the UK last Sunday with the temperature recorded at 25.5 centigrade. Three college gardens opened their gates and we decided to start in the centre with Trinity Fellows’ Garden. It must be one of the few bicycle free zones in the city; bikes were left outside the entrance.

The Gardener’s Chronicle, 15th June 1889 reported ‘The whole of the gardens are under the direction of a committee of Fellows belonging to the College, who are interested in horticulture.’ The Committee still meets regularly but it was the Head Gardener and his young team who were collecting the modest entrance fee.

An abundance of soft blue anemone blanda carpet the avenue walk; once Elm it is now Plane trees that grow along its length.

The Bin Brook meanders from West to East and beside it a wild flower meadow at its Spring best. 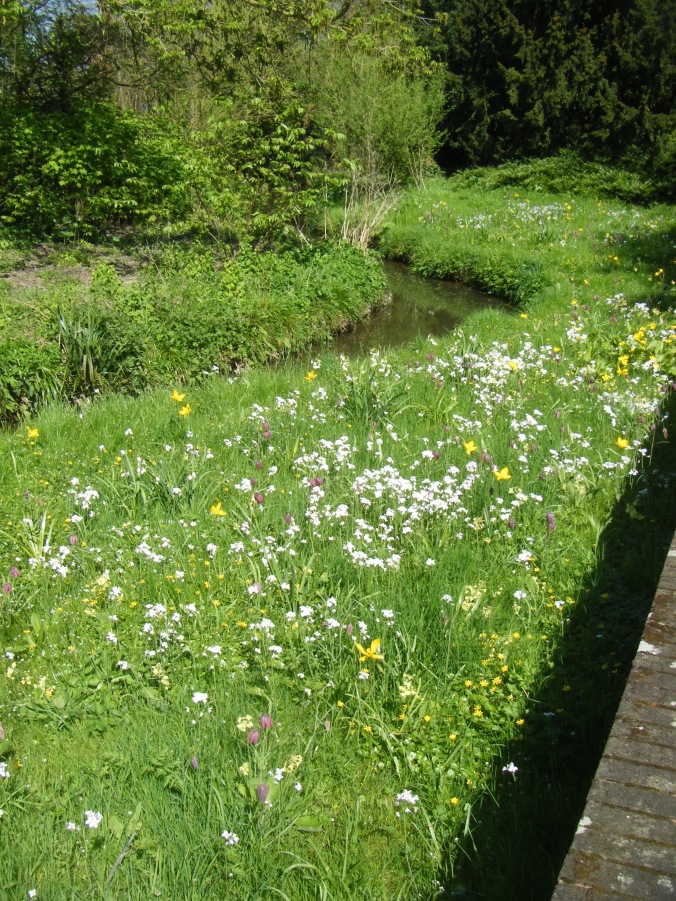 A bridge takes us over the stream into the new buildings. Akebia quinata growing on the pergola is delicately in full flower.

There is a clipped order and precision around the new buildings. 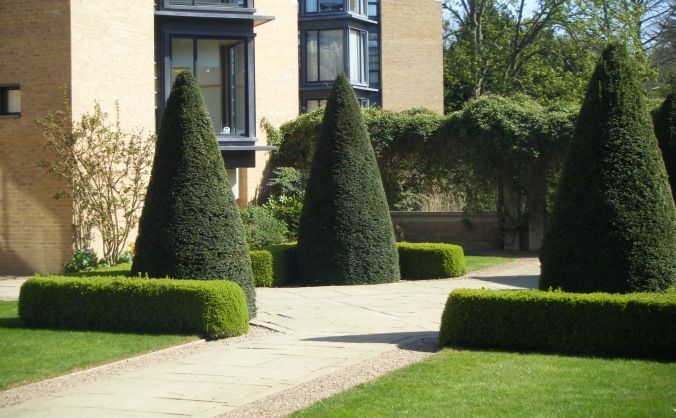 The modern seat curved into the wall has a kind of Edwardian feel and is softened by the clematis. 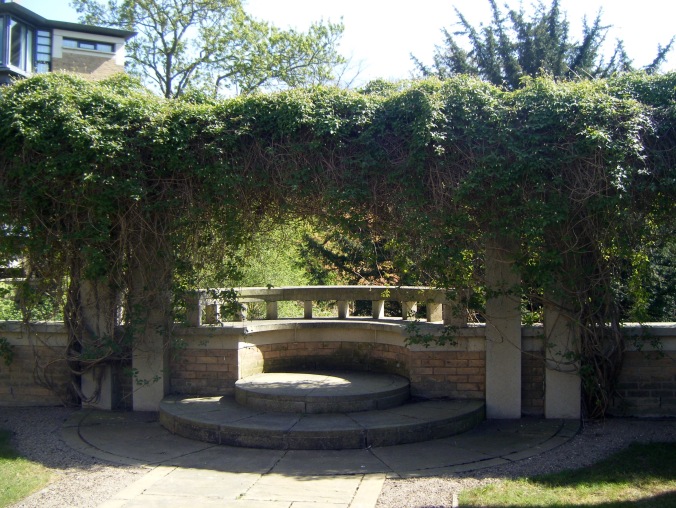 The view beyond is leisurely contrasting with the formality within.

Symmetry continues either side and up to the front door.

The Wisteria clambering over the wall is just waiting to burst into flower. It is such a joy to have blue sky.

The planting has been well thought out. There really is all year round interest.

No bare earth at the base of the tree; it is planted to soften the hard landscaping.

The mix of tulips gives a spectacular show, combined with plum-tinged Pittisporum they border the neatly mown lawn.

The straight lines of the paths are cushioned with Epimedium,

and Brunnera with Iris already in flower.

Decisions have to be made when you reach this quirky entrance.

College lawns and fine trees give a mature appeal to the space.

Ornamental grass flourishes under the canopy of the old tree.

A small knot garden nestles in between buildings on the North side. 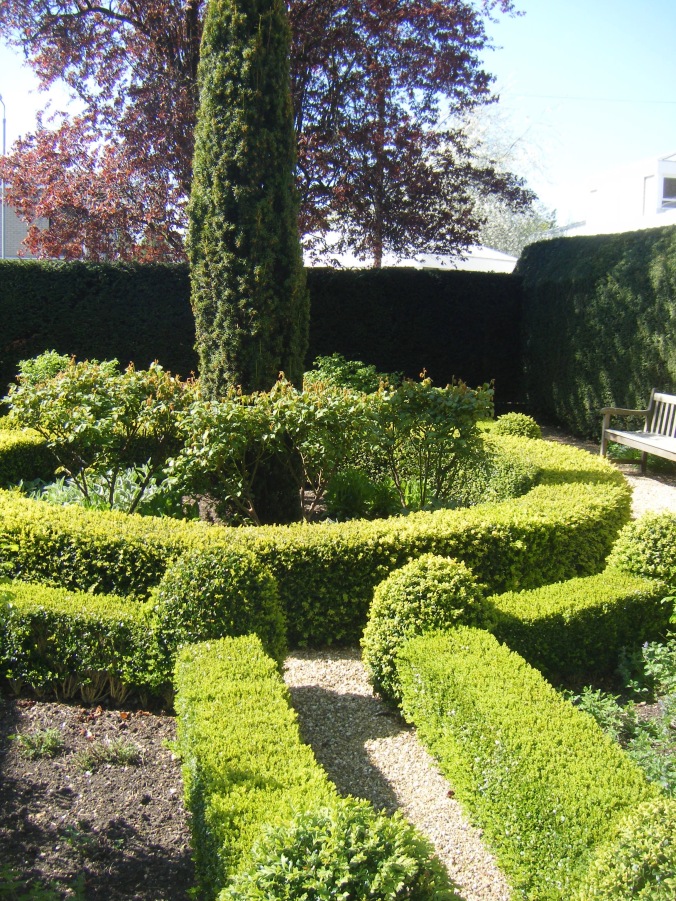 And an apple is happy baking against the sunny wall. 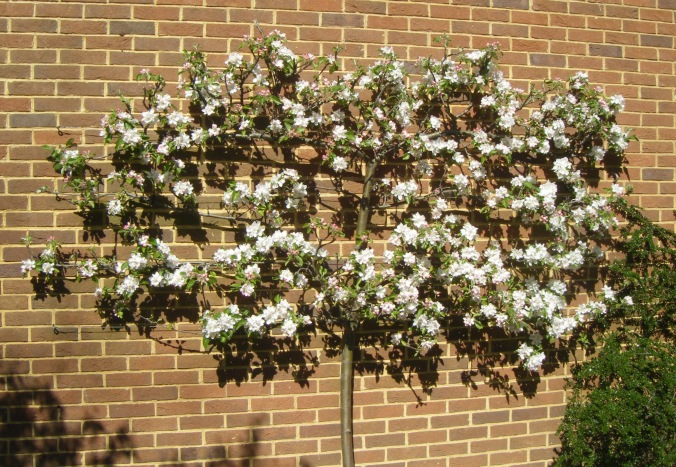 Silver and white is a winning combination in a shady area. 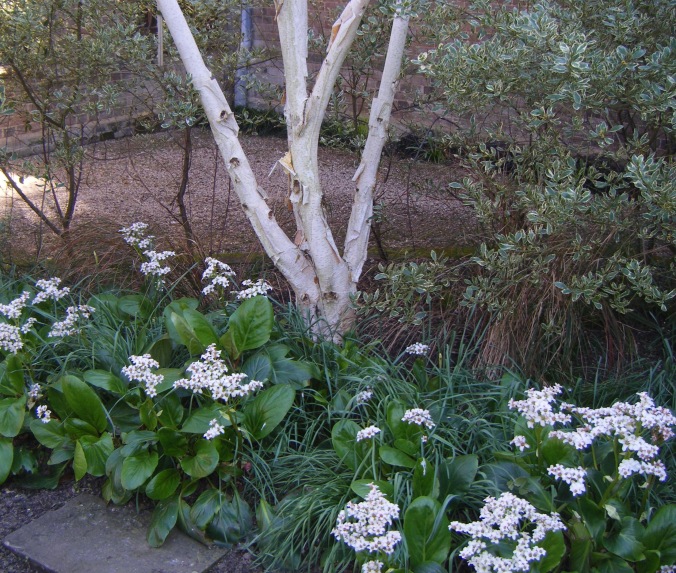 The ferns too, freshen the shade.

It is an explosion of colour in the terracotta pot.

We pass through the metal gate into the calm of Duff’s garden.

Once an area to grow choice vegetables and soft fruit for the high table, it now has a small lawn, interesting shapes and an herbaceous border.

A small but perfectly proportioned summerhouse looks out on the orchard,

and a beehive stands among the apple trees.

Away from Duff’s Garden we walk along paths mown in the long grass of Burrell’s Field, where cow parsley is inching up.

Across the hidden brook the mistletoe-laden tree rises up in the gap between two modern residential buildings.

A trusty work horse; a Ransome 36″ Mastif is parked by the hedge it must have produced many a fine sward.

The final part of the garden is The Roundabout, a large grass area named after the circular walk around its perimeter.

Which is made interesting by the assortment of colours found in the various shrubs and trees.

big enough to walk in. What do the Fellows get up to in here?

We found the teas and bought a deliciously freshly baked Hot Cross Bun served by the shy and charming Girl Guides.

It was the 63rd year that this garden has opened its gate for the NGS and we were grateful to be out of the heaving crowds of the City. Thankful too that the gardener and his team had given up their precious Sunday afternoon.