Back in May I spent a few days on a Garden History trip in Essex and one of the many interesting places we visited was Marks Hall near Coggeshall.  Arriving rather late in the day and with 200 acres to explore we had to get a move on, first walking over the bridge.

There is no Hall as such, having fallen into ruin it was taken down in the 1950s. It must have been a magnificent country house as seen in the photo that I have borrowed from the website of the University of Essex where you can find out about the history of the property: http://markshall.essex.ac.uk/history.html

A view of the Hall with the same bridge in the foreground. 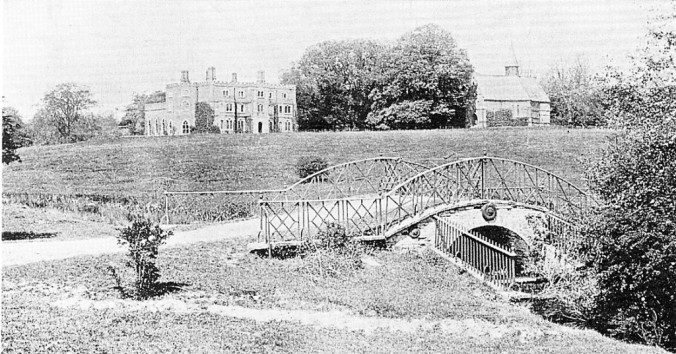 The estate is now administered by the Thomas Phillips Price Trust. Price bought the estate in 1898 and bequeathed it to the nation in the interests of agriculture, arboriculture and forestry, and it was first opened to the public in 1993.

We walk past the Coach House, now a wedding venue and flower garden, which is firmly closed in preparation of the next event.

The tree collection represents the temperate areas of the world and most are in good condition and well labelled. One of the first trees we admire is the variegated Common Beech, fagus sylvatica ‘Albovariegata’. 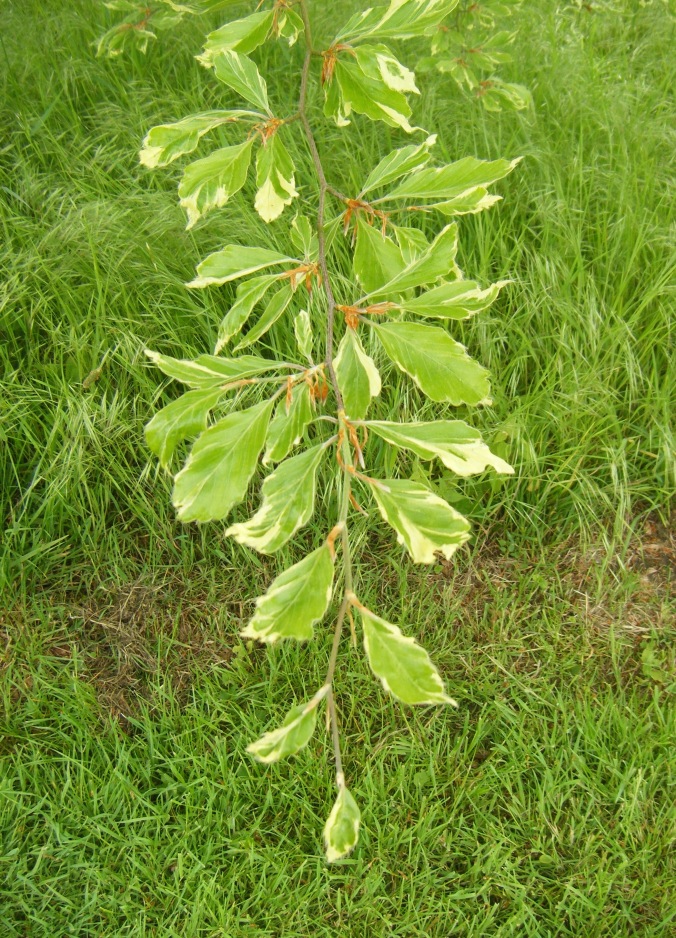 This unusual oak is named after its fern like leaves, Quercus robur ‘Filicifolia’. 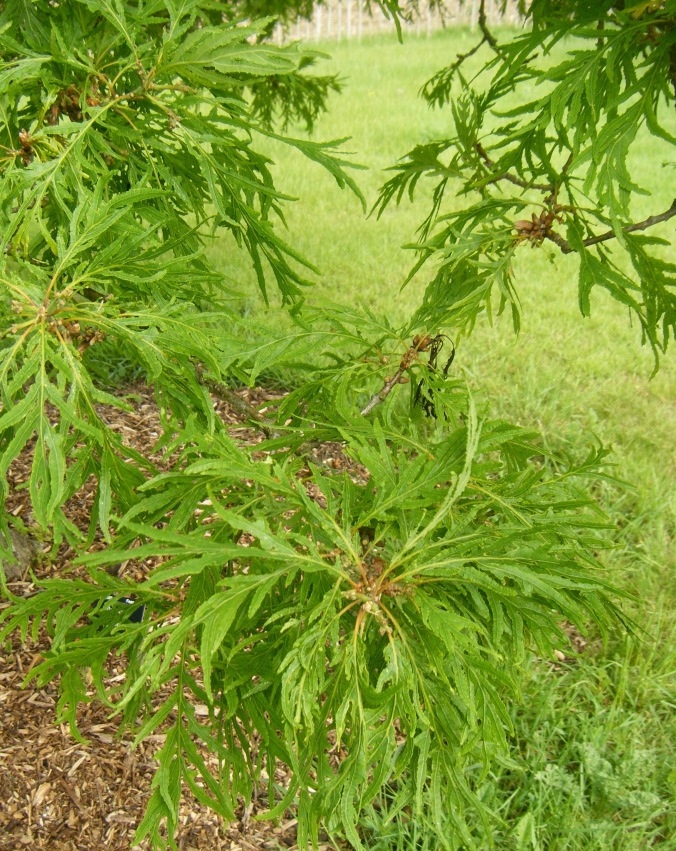 Along the south side of the lake is the Birkett Long Millennium walk where the trees and shrubs were planted to provide autumn and winter colour. Right now there appears to be a white theme running through which, combined with the fresh green growth of the leaves is both beautiful and calming. Such specimens as Cornus kousa chinensis “China Girl” are showing a spectacular display, 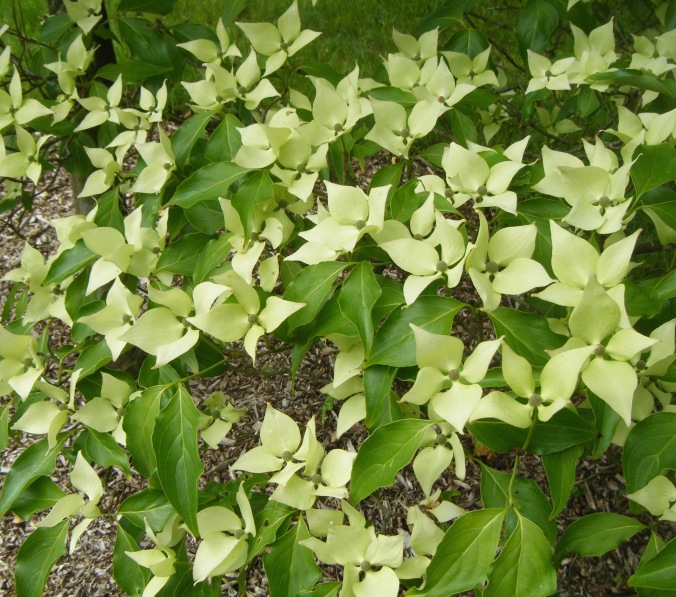 and should not to be confused with Cornus contreversa.

The flowers of Euonymus hamiltonianus “Winter Glory” are dainty and white, 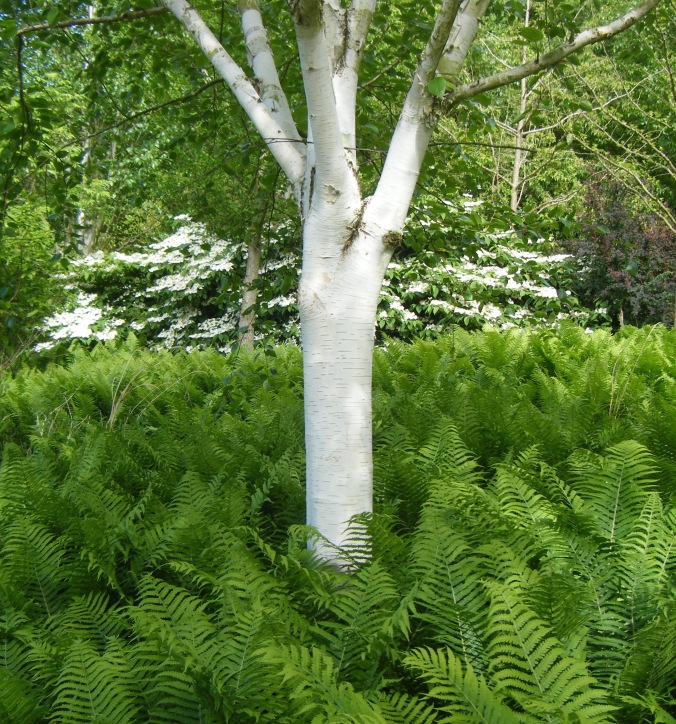 Not so very white, but intriguing is the bark of Betula davurica, the Asian black birch.

Through the trees and across the other side of the lake we catch sight of the Walled Garden. The lakes, so the story goes, were dug by Cromwell’s troops at the time of the siege of Colchester in 1648. 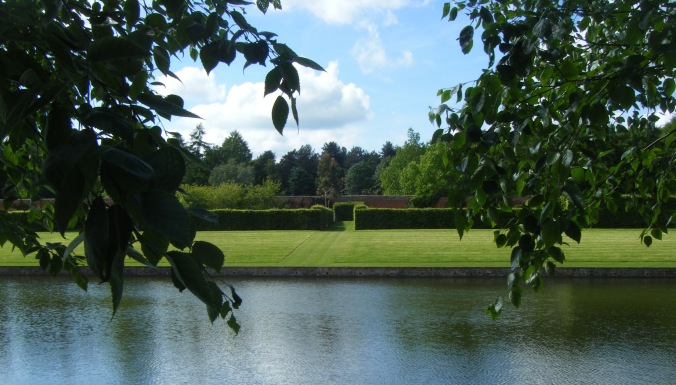 There are many different woodland walks but being in a hurry we have ignore the paths through the Taxodium Swamp and the World War II Memorial Site for another day. We are still in time for the garden gate to be open to the Walled Garden.

Three sides of this 18th century garden is walled with the south side open where the length of lawn, effectively mown with two heights of cut, gently runs down to the lake side.

We can look back across to those shrubs and trees through which we have just walked, reflecting in the water. 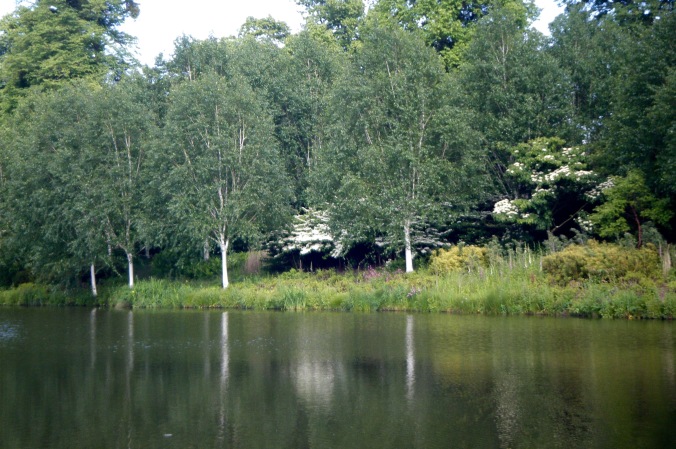 The Walled Garden was redesigned by landscape architect Brita von Schoenaich in 1999 who has divided the garden into a number of unusual areas. Incidentally Schoenaich who is famed for her sustainable planting, recently designed the square which lies in front of the newly restored London King’s Cross station.

The herbaceous border which runs along the length of the top wall is 160 metres and thought to be the longest in East Anglia. A rich variety of shrubs and perennials are grown and in the front of the border is a generous planting of Iris pallida ‘Variegata’, 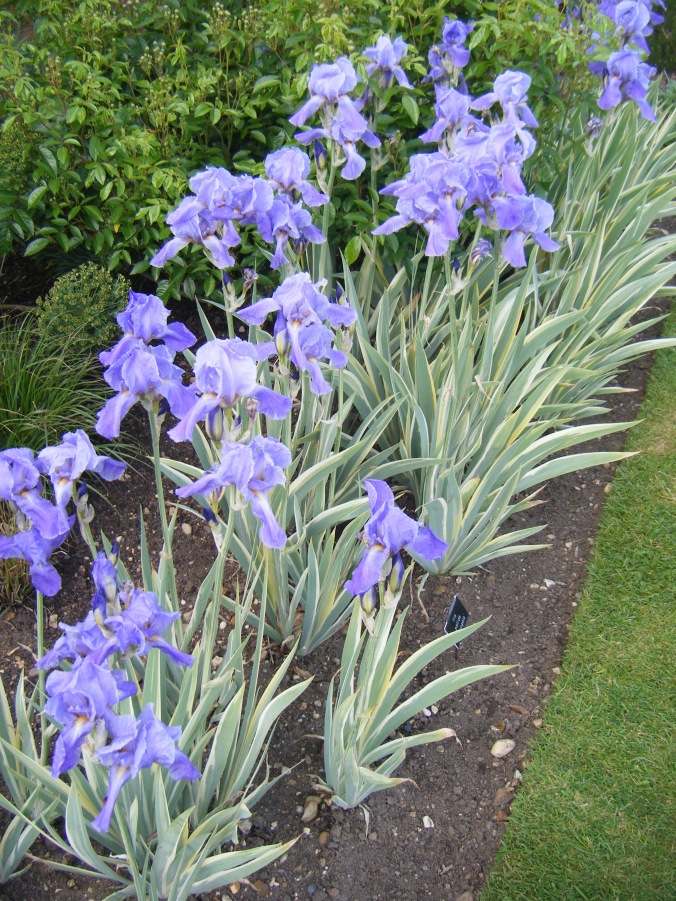 whilst Echium pininana reaches for the sky.

Further along sits the handsome peacock at home in his secure surroundings. 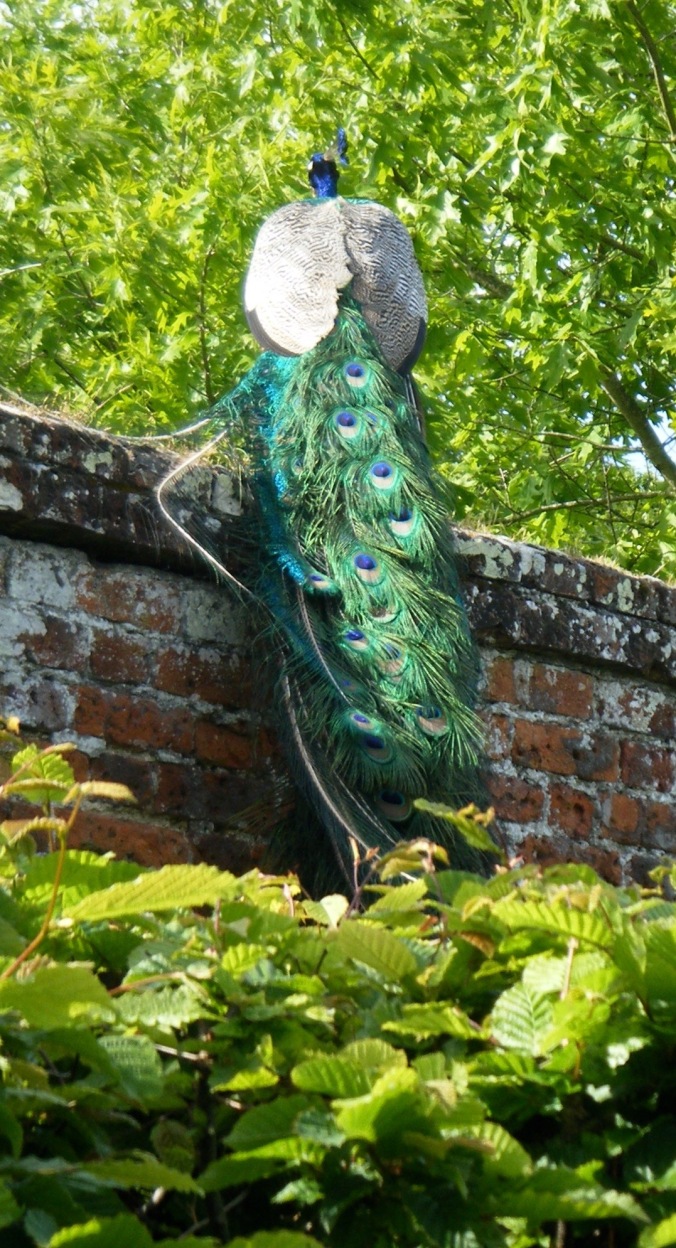 The first part of the garden is in the form of an earth sculpture, a giant’s footprint.

which  then moves into an area where the pittosporum hedge gently weaves backwards and forwards between planting and benches.

The simple planting of the next area reminds me of the centre of a French village where boule is gently played under the shade of the trees.

There is in fact a large concrete boule or two, and the line of square concrete slabs are softened and interplanted with square slabs of box. 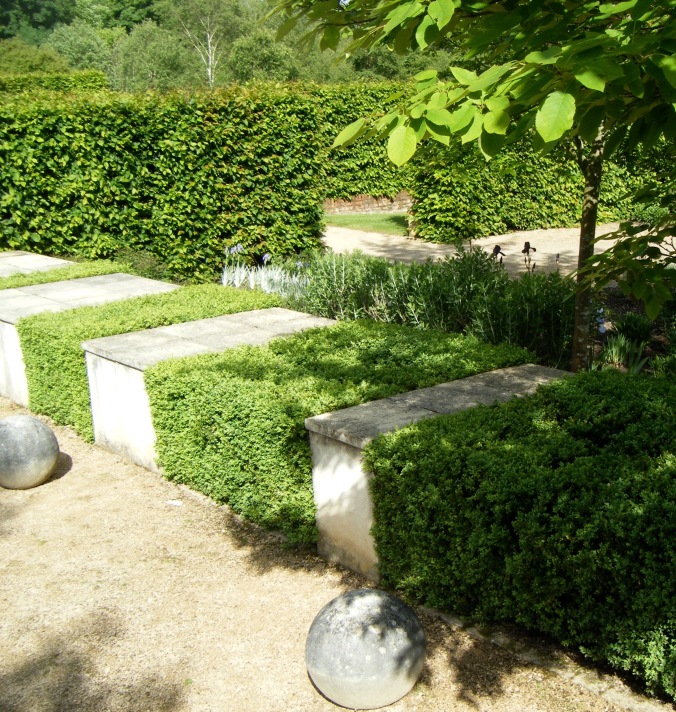 Finally through the shaped hornbeam hedges we arrive at a circular grass mound, the smoothness contrasted by the round of rough slate in the centre.

Stipa gigantea, well advanced in these sheltered walls seems the antithesis of the clipped box balls.

and like a full stop at the end of the wall is euphorbia mellifera.

Rather than taking the obvious route back straight across the grass I decide to walk back through the designed spaces. It is the form and structure, the mixture of hard materials combined with a variety of planting, seemingly simple that makes the design of this garden so enjoyable. 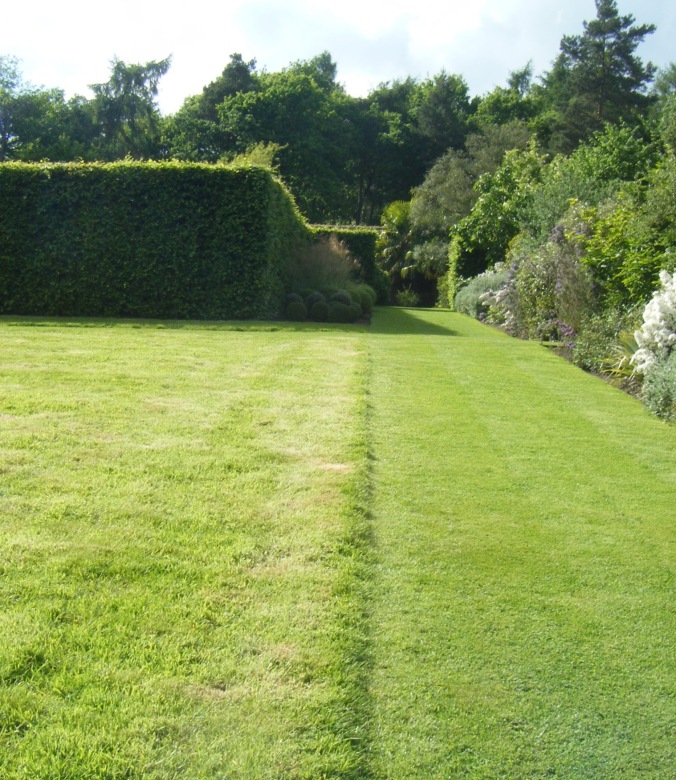 Slipping back through the opening in the hornbeam I follow the slate path, 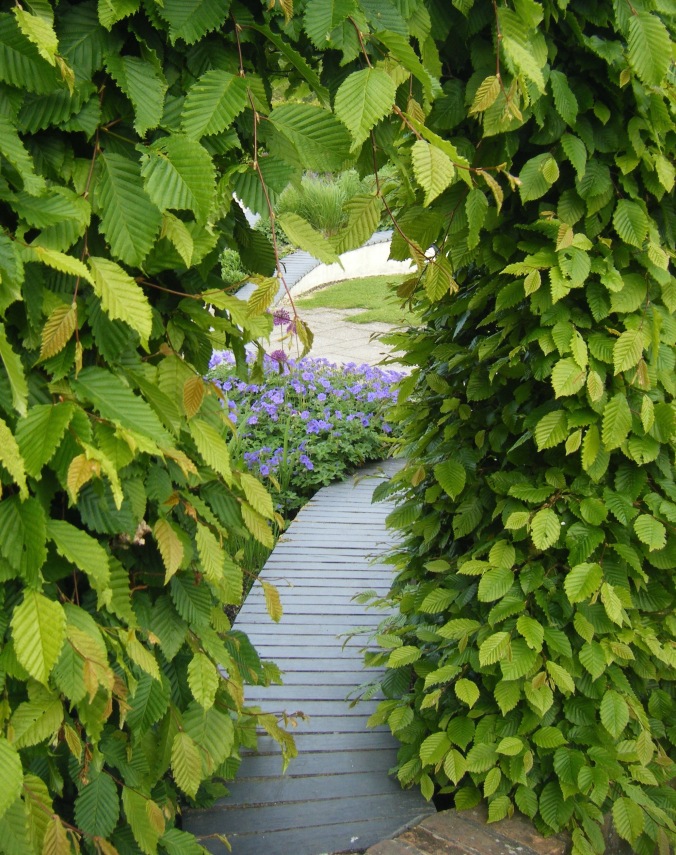 back through the ‘boules allee’

and on down to the lake where the brick bridge reflects in the water and I am reminded that although I am in a  walled garden I am also in a large arboretum. 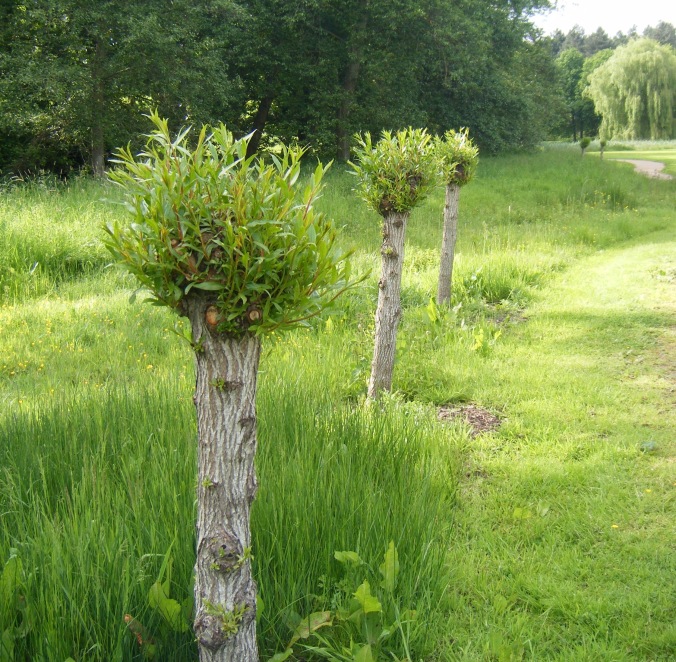 There is plenty we have not been able to see and we look forward to returning.  Marks Hall is not open on a specific day for the NGS but like some other public gardens it is listed in the Gardens to Visit book because they are kind enough to make a donation. For visiting times: http://www.markshall.org.uk/visitor-information/. It is well worth a trip but do allow plenty of time.

3 thoughts on “Marks Hall, a walled garden in wonderful woodland. (58)”