Back in May we stayed with friends in North Buckinghamshire and they suggested we might visit Bledlow Manor, the home of Lord Carrington. A beautiful drive through the Chilterns brought us to this lovely estate and we were able to park under the line of flowering chestnut trees. 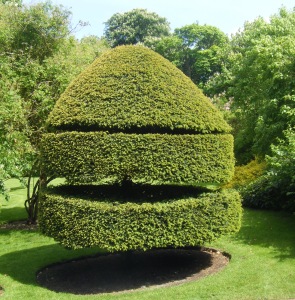 The house had been in the family since the end of the 18th Century and when the Carringtons moved here in 1946, it was in need of much renovation. There was no garden of mention at that time and work did not begin in that area until 1969. Created together, it was Lady Carrington who had the interest in plants; her obituary in the Telegraph in 2009 reported “My wife,” Lord Carrington always said, “is the plantswoman,” adding (in a reference to her encyclopaedic knowledge of botanical names): “She doesn’t really talk English, she talks Latin.”

Lord Carrington, the last surviving member of Churchill’s cabinet, and just short of age 98 was standing outside the front door ready to greet visitors. After exchanging a few pleasantries we slipped through the tall pineapple-topped gate posts to the right of the house. 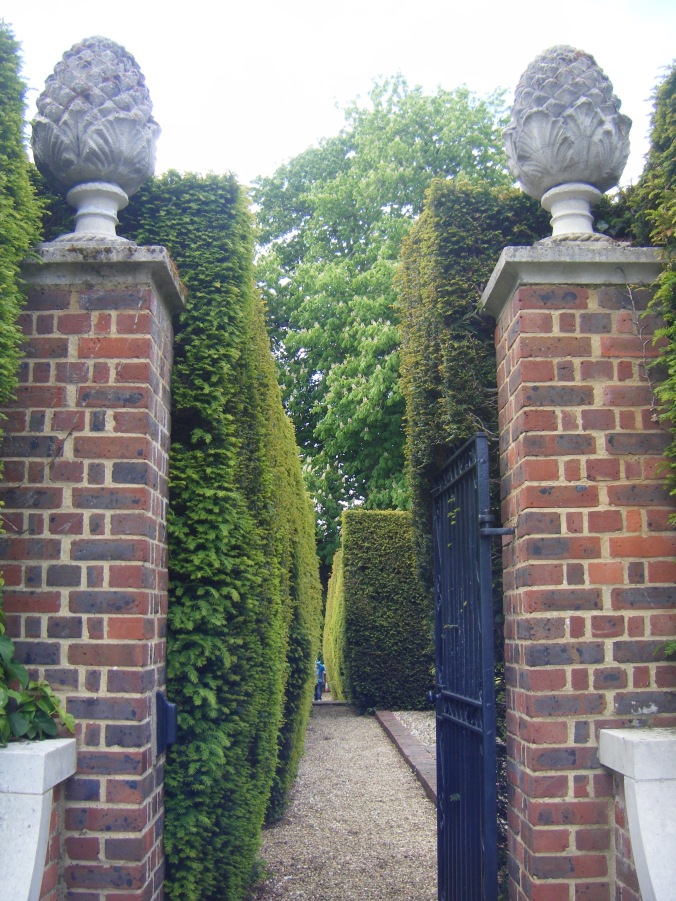 We decided to head straight down to the water garden, known as the Lyde Garden, and just for the moment snatching a view of the terrace running in front of the house,

and swiftly passing the armillary sphere to the right, with the intention of returning to this part of the garden later on. The yew and box are trimmed like perfect cut slices of cake.

The Lyde Garden is situated across the road and is actually accessible at all times of the year. Well-made steps guide us down through the leafy wilderness,

and at the base level the path bends gently round and through an oriental wooden structure, 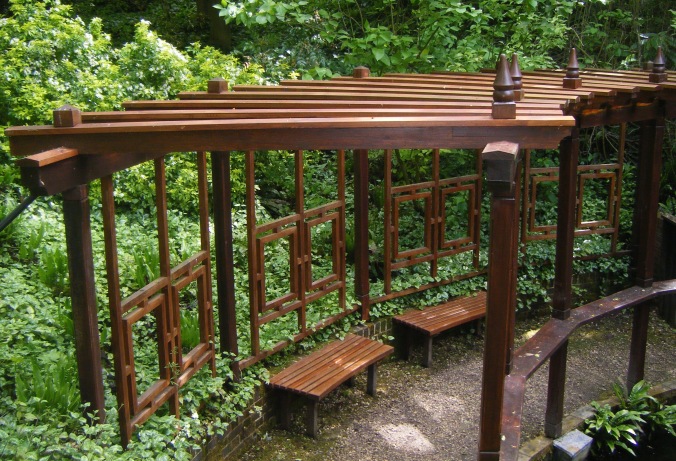 from where you can sit awhile and enjoy the peace and the circular pond, the centre of which has a group of metallic flowers poking up above the still waters.

The river Lyde rises here and is a tributary of the Thames. Originally watercress beds, it is now planted with ferns, gunnera and hostas.

Cool and watery, the weeping willows have now replaced the diseased wych elms. 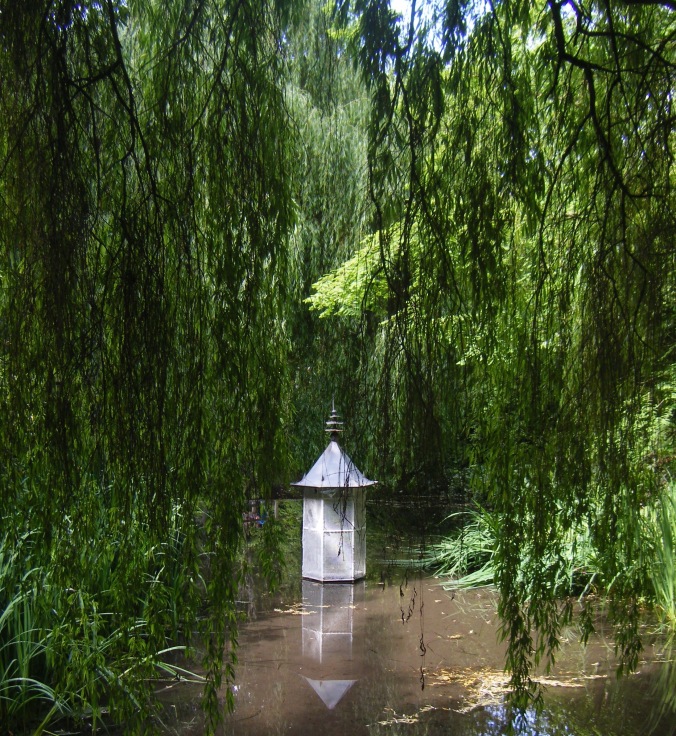 Crossing back over the road we arrive onto the lawn in front of the charming Adam house which sits gracefully amongst low summer borders.

At one end of the lawn are crisply cut buns of yew,

and at the other, ornamental fish ponds surrounded in brick, a design which perhaps reflects the time of construction.

The garden is not just about the plants but is a glorious setting for a fabulous collection of sculptures which the Carringtons began collecting in the early 1990s. 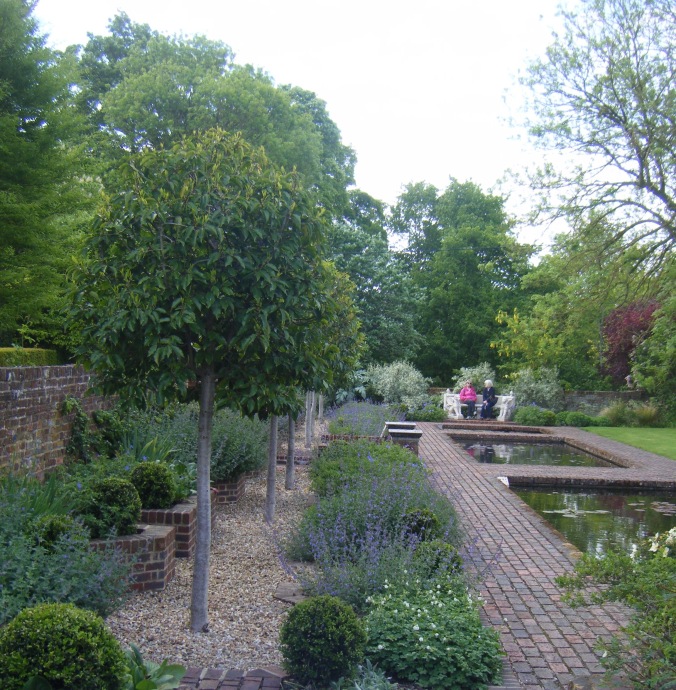 The first piece of art, strategically placed and called ‘Primitive Form’ is by the Italian born Marzia Colonna. Today it has been enhanced by outstretched arms. 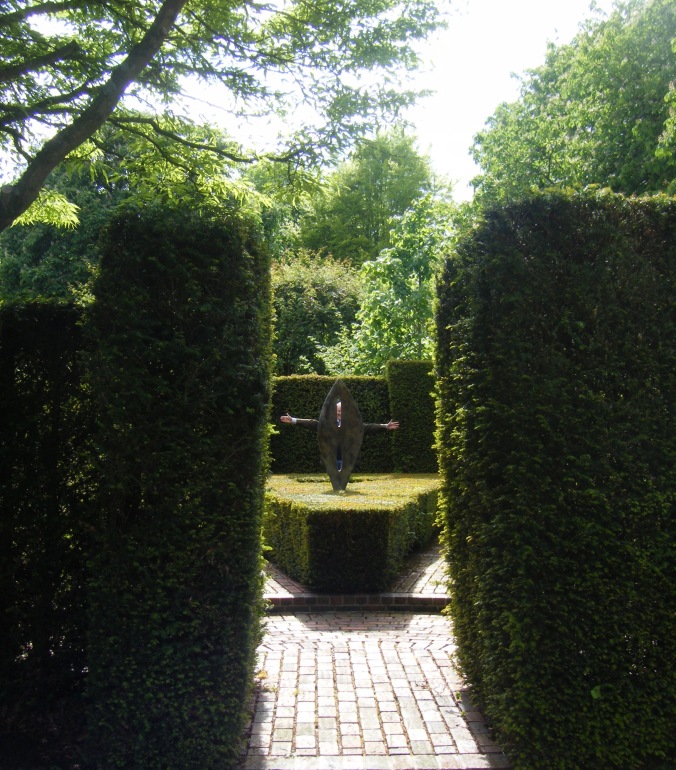 Purchased in 2005 it fits perfectly amongst wedges of box where it can be viewed from all angles. 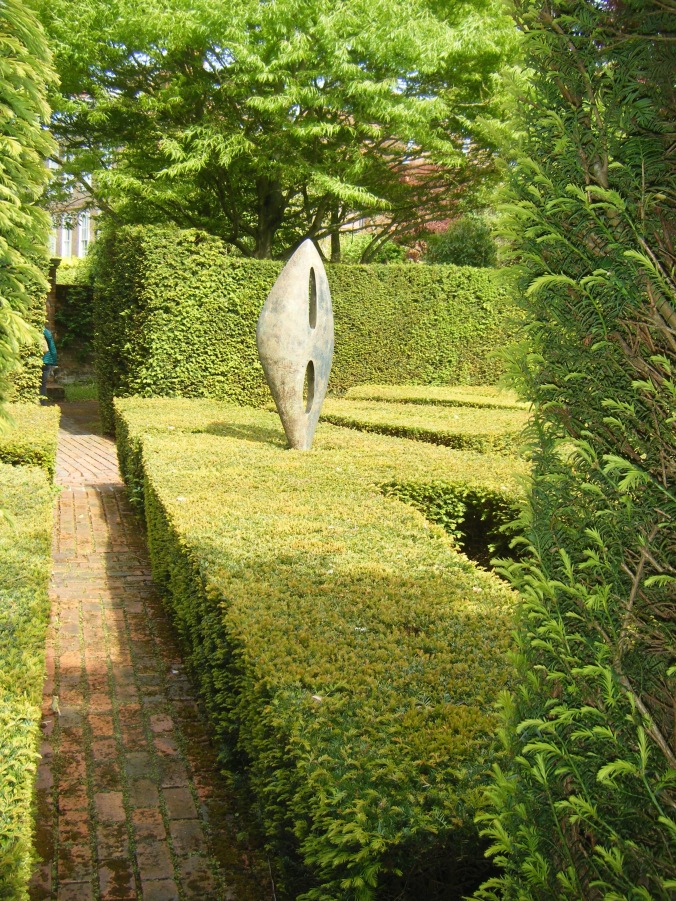 The brick pathways lead out into an open, less structured area. Mown lawns sweep around borders packed with a huge variety of shrubs.

Then around the corner we meet gorgeous ‘Gorilla’ by Michael Cooper and made from Belgian fossil marble commissioned in 1993. Lord Carrington explains how it came about:

“Michael Cooper is a friend and near neighbour of mine and, some years ago, I asked him whether he would be prepared to do a piece for a new garden I was making at that time and in which there was an empty plinth. ‘I will do you a gorilla’, he said and there it stands, or rather sits, today – greatly admired and loved by all the children who visit the garden during the summer. Michael has the most wonderful talent for portraying animals, as those of you that have seen his sculpture in many public places will know .” 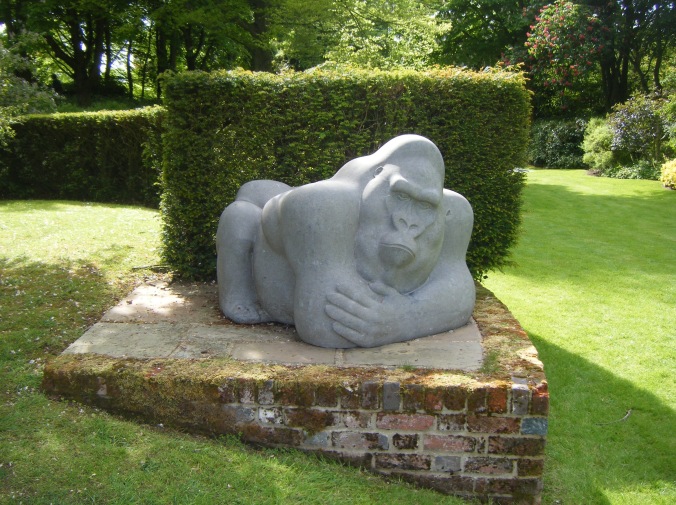 The Carringtons were keen to support young artists, and this piece was commissioned in 1991 when Alastair Lambert was still a student at The Royal College of Art.

Paul Vanstone was also still a student at the Royal College of Art.  Vanstone recalls that following a visit to the College in 1993, Lord Carrington invited him to the garden and after spending a day there he commissioned Fallen Angel.

In 1998 Barry Mason’s Water Sculpture was added to the collection. Mason’s early work was conceived to be installed in landscape settings rather than art galleries. This catches the sunlight as it magically spins around.

Some way from its homeland and happy amongst the cow parsley, “Rainbird”, a Ground Hornbill is by the Showa sculptor Saidi Sabiti. It was purchased in Harare in 1993.

It was a charming moment when I saw a child hop up and sit for some time on one of these ‘Three Fruits’. Enjoying their natural shape, he rubbed their smooth surface with his hands. No restrictions of an art gallery here. These were created by the British artist Peter Randall-Page in 1991,

Sheep can be heard grazing in the field beyond, and Red Kites fly overhead. John Robinson’s (1935 – 2007) ‘Immortality’ in polished bronze was purchased in 1992. Robinson describes its conception:

“Soon after my mother’s death, our eldest son married, and as these things go, after a while his wife was expecting a baby. My position had suddenly changed. Instead of being the middle generation, I became the older one, a grandfather. I began to think of doing a sculpture that would capture the passing on of the precious flame of existence within a family, and I needed a symbol.

I believe that Immortality is made up of one’s memories of the past, as well as those one leaves behind. I see this Symbolic Sculpture not only as a continuous journey through generations, but also the scroll on which all of life’s experience (DNA) is recorded. “

‘Rondo’ is by Charlotte Mayer and was acquired in 1997, A Fellow of the Royal British Society of Sculptors,  she says:

“A work of art should speak for itself. It should need no verbal description although a title may give a subtle hint of what is in the sculptor’s mind”.

I never discovered who this was by, small but not insignificant nestling by a buddleia; perhaps its identity will be revealed. 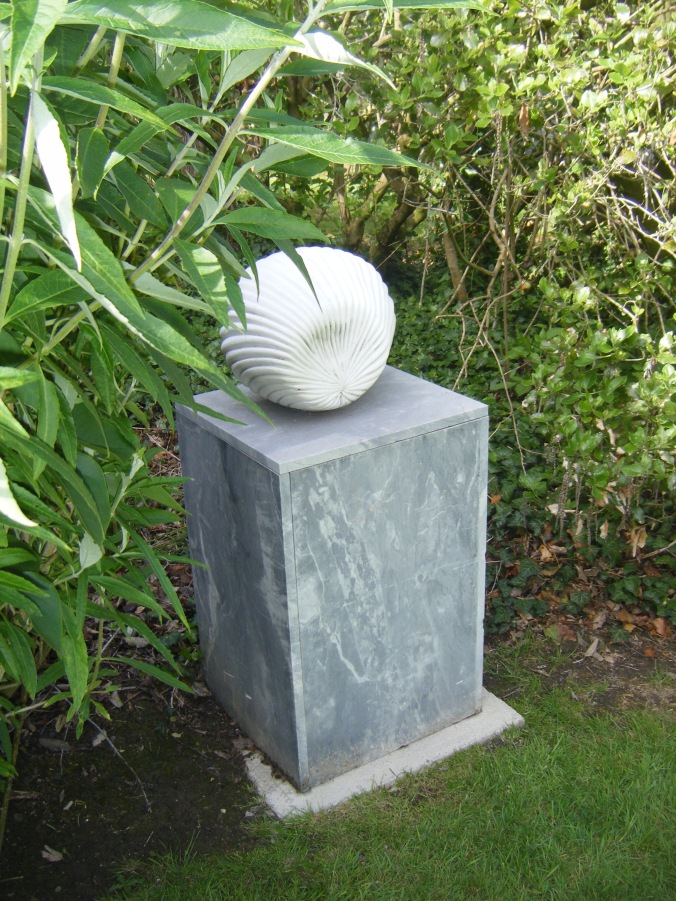 Nestling amongst the shrubs since 2006 is ‘Torus’ a piece by Jonathan Loxley, who usually now works in marble. 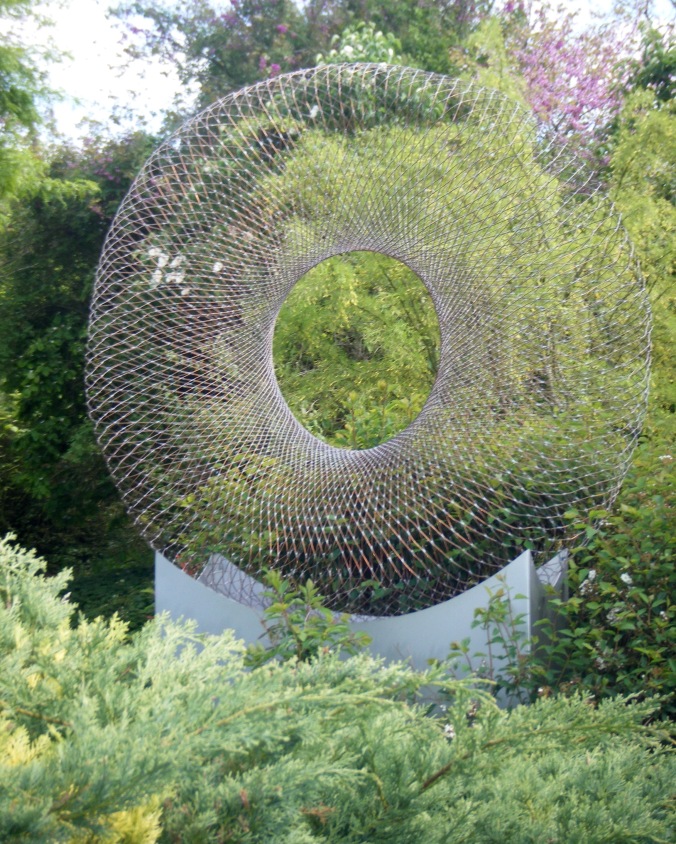 Perfectly positioned in a small clearing is the serene ‘New Renaissance’ created in 1993 by Patricia Volk, the Belfast-born ceramic sculptor. 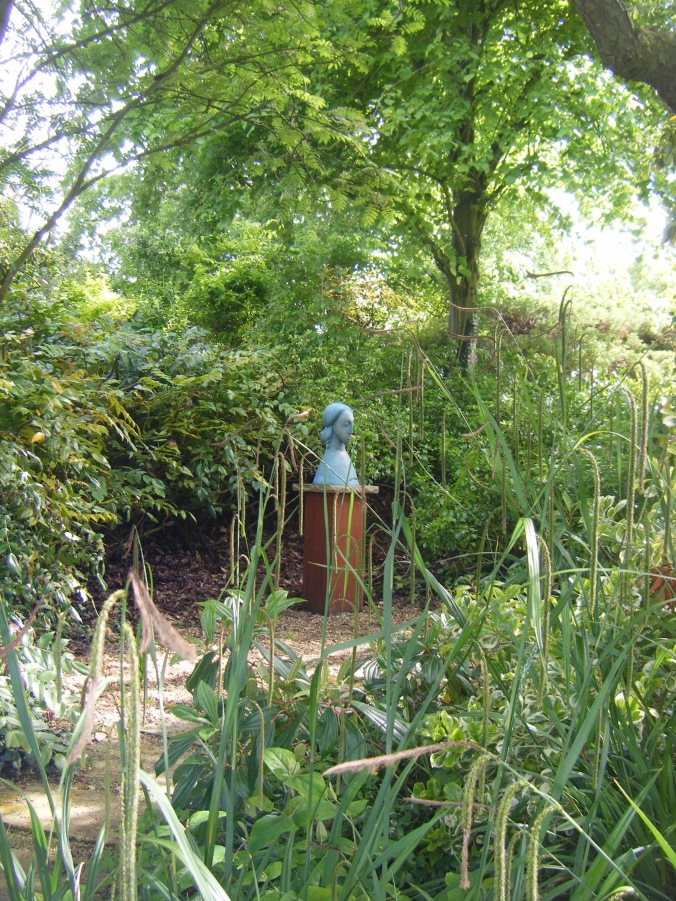 Terence Coventry’s ‘Avian Form’ has stood here since 1999. Lord Carrington happened to be nearby when we were admiring it, and jokingly he said ‘he doesn’t like you, you know’. And perhaps he was right.

Oh, and this little figure is actually alive. Lord C names his wire-haired dachsunds after prime ministers; having already a Margaret but before Theresa, he decided on Dame Norma Minor, ‘”well, she couldn’t be Major” he laughed. 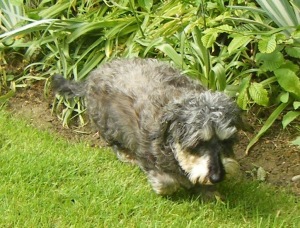 A fleet of wheelbarrows raised against the hedge are almost an art form.

Skirting around the tennis courts we come into the south garden. A magnificent metal bowl decorated with swirling fish stands at the head of a double row of viburnum carlesii which lead up to a sunken pond, 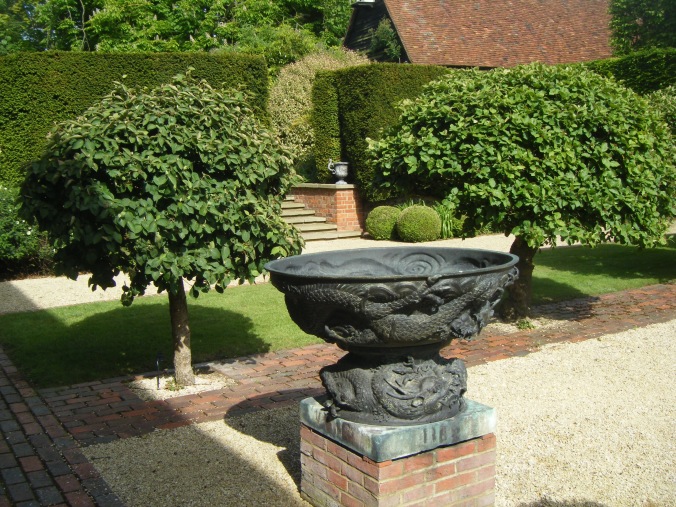 where ornamental herons are enjoying an afternoon’s fishing. 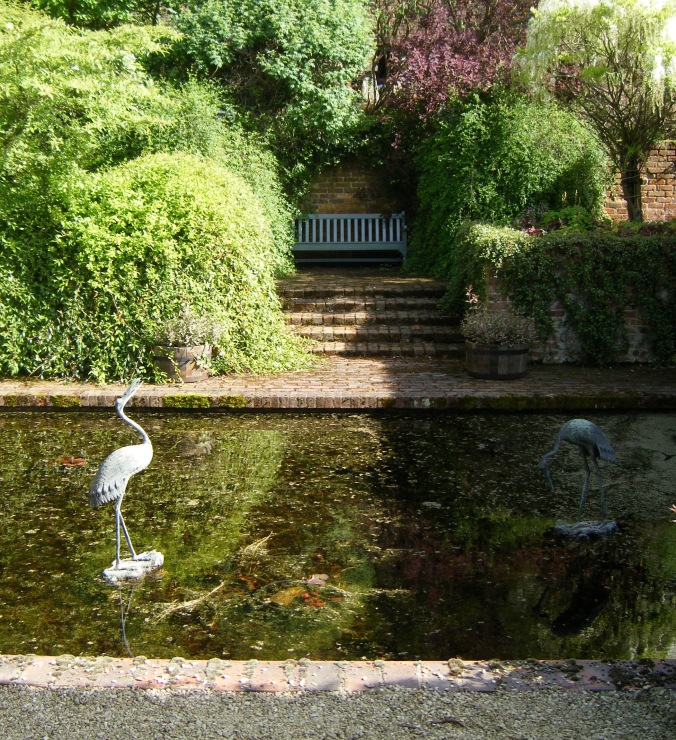 Over the hedge is the two storey gazebo; made of Buckinghamshire material it was inspired by a visit to Hidcote.

Steps lead up from this south garden to a small enclosed area. From the raised urn you walk diagonally across to arrive at the front of the house where we originally entered. 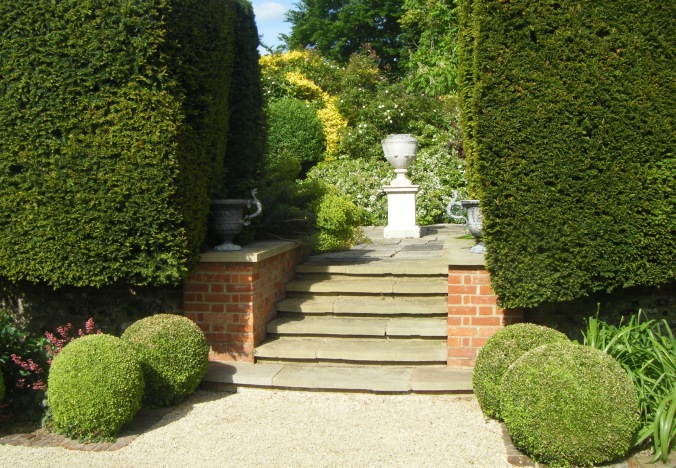 Tea is served in the open cart sheds and today there is a specially large cake in celebration of 50 years opening with the NGS.

Time is running out and we have not seen half the garden yet. We race back across to the armillary sphere where we turn right through the archway in the yew hedge. Here is ‘Coracle’  by William Pye commissioned in 2001. Its gentle ebb of water is mesmerising.

In the next section of garden this unidentified piece at the end of the brick path seems to dance, its outline lifted by the dark background hedge.

We wonder at the rhythmical design of this slightly oriental trellis.

The map describes a snail garden and we think we have found it. 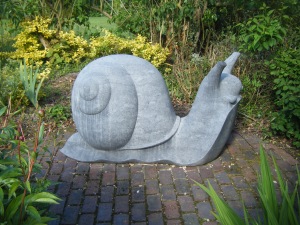 Another set of pineapple-clad gate posts welcome us into the walled garden where a haze of lavender lines the path up to the gazebo.

It can’t all be works of art; there is a practical side to this garden too. Over to the left rows of vegetables, not yet in full production, are being prepared, and over to the right the alliums are flowering with the peonies still tightly in bud.

In the centre of the wall is the a mural of  Vertumnus, God of Vegetation: painted in the manner of Guiseppe Archimboldo, it is by Owen Turville.

Out onto the lawn near the main entrance is Barry Mason’s Oculus. Originally commissioned by English Heritage as part of the ‘Year of the Artist’ celebrations it was sited in the ruined nave of Hailes Abbey near Cheltenham and was donated to Lord Carrington in 2003. 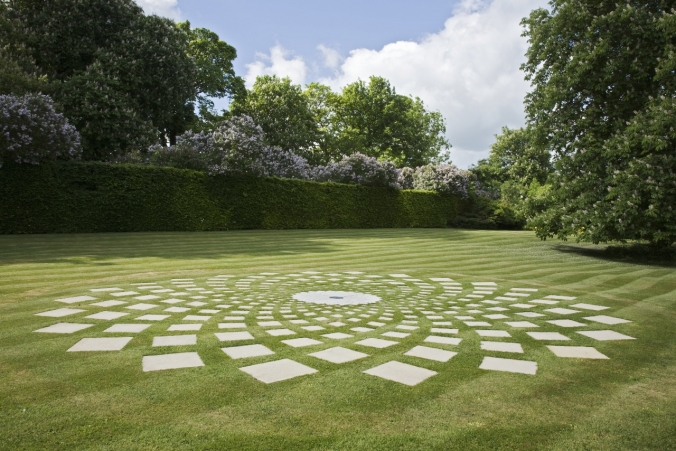 Only 2 gardeners look after these noble acres and it really is time to go now for they are sweeping up behind us and the shadows are long. We purchase some honey and say our goodbyes. The great man is still here and must be pleased with his 350 visitors or so,

I say once again ‘you don’t have to be a gardener to enjoy a garden’. Here the garden is not without its many features of herbaceous borders, mature shrubs and hedges, fine lawns, ornament, parterres, topiary and water but it also combines as a gallery.

An inspiration and a visit hard to beat.

7 thoughts on “The Manor House, Bledlow; sculpture and setting (89)”